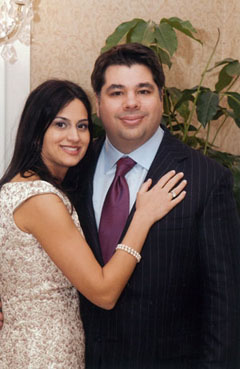 STONY BROOK, NY, April 8, 2013
– Stony Brook University received a total of $3 million in donations to enhance course offerings in Greek language and culture, with the immediate goal of creating curricula leading to a baccalaureate degree and graduate program. The gift, which includes $1.25 million gift from George Tsunis, $500,000 from members of the Long Island and New York Hellenic Community, and matching funds from the Simons Foundation, will establish the George and Olga Tsunis Center in Hellenic Studies and The James and Eleni Tsunis Chair in Hellenic Studies at Stony Brook University, in honor of Tsunis’ parents.

Tsunis is a Long Island resident and the founder, chairman, and chief executive officer of Chartwell Hotels, LLC, which owns, develops and manages Hilton, Marriott, and Intercontinental hotels throughout the Northeast and Middle Atlantic. Tsunis, who also serves as a member of the Greek Orthodox Archdiocesan Council of the Greek Orthodox Archdiocese of the United States and is a member of its Faith Endowment, was introduced to the idea of supporting Stony Brook’s Hellenic Studies center by his friend, Father Alex Karloutsos. Fr. Karloutsos is a priest of the Greek Orthodox Church in New York City who represents the archbishop to the White House and Congress. Democratic Party Leader Nancy Pelosi applauded the news of Tsunis’ gift to Stony Brook.

“The bonds between the United States and Greece date back to our country’s founding, inspired by the ideals of democracy first born in Greece and advanced on our shores – and George’s generosity and leadership, dedication to our values and commitment to our countries’ shared heritage continue to strengthen those ties,” Pelosi said.  “The James and Eleni Tsunis Chair in Hellenic Studies at Stony Brook will serve as a source of pride for the Greek-American community, as a reflection of George’s work, and as a fitting tribute to all those who, like George’s parents, reached our country and realized the American Dream.”

Mr. Tsunis and his wife Olga have made several substantial philanthropic gifts at different institutions, but this is the first time they have put their names on an endowment. They both expressed admiration for Jim and Marilyn Simons’ generosity and leadership at Stony Brook, which inspired them to lend their name to the George & Olga Tsunis Center for Hellenic Studies at Stony Brook, Tsunis explained, because they hope it might help create a model for Center of Hellenism across the country.

The James & Eleni Tsunis Chair in Hellenic Studies honors George Tsunis’s parents, Greek immigrants who Tsunis says came to the United States in search of the American dream. “To my parents, education was everything. They always thought of it as the ‘great equalizer,’” Tsunis said, recalling another piece of his father’s wisdom: “You owe your life to your mother, and you owe the fact that you lead an enlightened life to your teachers.”

“This is truly a transformational gift,” remarked Stony Brook Provost Dennis Assanis, also of Greek descent. “By enabling us to establish a center and a chair in Hellenic studies here at Stony Brook, Mr. Tsunis is fulfilling our vision and significantly contributing to the rejuvenation of the humanities and the arts. We are so very grateful for his generosity because we can develop a truly interdisciplinary program that will attract an outstanding scholar and promote the study of language, culture, history, philosophy, the arts, and more. It will create synergies with other centers already in place at Stony Brook while also becoming a shining beacon of the Greek heart and the influence Hellenism had and still has on today’s world.”

“We are honored and humbled by the generosity of George and Olga Tsunis,” said Dr. Samuel L. Stanley Jr., M.D., president of Stony Brook University. “The Greek influence is everywhere in modern society – from philosophy to medicine to architecture to the arts. By establishing a center to study and celebrate Hellenism and by helping us attract a world-class scholar, Mr. and Mrs. Tsunis are giving us the tools to examine and solve modern day challenges and inspire generations of students, faculty, and members of our local and global communities.”


Part of the State University of New York system, Stony Brook University encompasses 200 buildings on 1,450 acres. Since welcoming its first incoming class in 1957, the University has grown tremendously, now with more than 24,000 students and 2,200 faculty. Its membership in the prestigious Association of American Universities (AAU) places Stony Brook among the top 62 research institutions in North America. U.S. News & World Report ranks Stony Brook among the top 40 public universities in the nation and Kiplinger named it the 22nd best value in public colleges for in-state students and 9th for out-of-state students . One of four University Center campuses in the SUNY system, Stony Brook University co-manages Brookhaven National Laboratory, putting it in an elite group of universities that run federal research and development laboratories. As the largest single-site employer on Long Island, Stony Brook is a driving force of the regional economy, with an annual economic impact of $4.65 billion, generating nearly 60,000 jobs, and accounts for nearly 4% of all economic activity in Nassau and Suffolk counties, and roughly 7.5 percent of total jobs in Suffolk County.