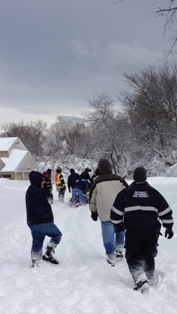 Responders from the Setauket Fire Department and Emergency Management Services personnel transport Thomas Monaghan on a “stokes stretcher” from his home in East Setauket after he suffered a heart attack shoveling snow on the morning of Feb. 9. A few minutes later, two Good Samaritan snowmobilers arrived and pulled Monaghan’s stretcher to a waiting ambulance. He was taken to Stony Brook University Hospital, where he received stents to open two blocked arteries. [Photo taken by Margaret Monaghan]


STONY BROOK, N.Y., February 15, 2013 – Thomas Monaghan had only gone about 10 feet in clearing his driveway of snow the morning after Blizzard Nemo when he felt enormous crushing chest pain. As someone who had experienced a heart attack previously, he knew what was happening. He was having another one.

The 44-year-old resident of East Setauket, N.Y., stumbled back to his house. His wife, Margaret, a former cardiac nurse at Stony Brook University Hospital, saw him vomiting. She immediately called 911, gave him an aspirin and nitroglycerin. Then they waited for an ambulance to come.

On this day, though, with nearly 30 inches of snow on the ground, the ambulance could get no closer than a mile to his home. But through a series of events, Thomas soon found himself strapped to a “stokes stretcher” – the type of basket used to airlift patients into helicopters – and transported via snowmobile to the waiting ambulance.

First to arrive on the scene were two Setauket Fire Department volunteers, including one who lived nearby and heard the call for assistance over his radio scanner. Soon other fire and EMS workers were also on the scene. The crews loaded Monaghan into the basket and began the long trudge to the ambulance. But then, seemingly out of nowhere, two snowmobilers stopped to assist.

“How often do you see snowmobiles in Setauket?” mused Monaghan, who still does not know the names of the Good Samaritans who came to his rescue.
Once Monaghan got to the ambulance, he was quickly transported to the Emergency Department at Stony Brook University Hospital, and whisked to the cardiac catheterization laboratory. He received stents to relieve two blocked arteries.

“They were ready in two minutes and two seconds,” Monaghan said of the cardiac catheterization team at Stony Brook University Heart Institute. “And the relief I felt was immediate. It was phenomenal.” His catheterization was performed by Anil Mani, MD, FACC, Assistant Professor of Clinical Medicine, and Associate Director of the Cardiac Catheterization Laboratory at the Heart Institute.


An executive with Cablevision Systems Corp. in Bethpage, NY, Monaghan said he would not be alive today if his wife was not a cardiac nurse. And thanks to the timely response of EMS and Fire Department personnel, combined with the timely appearance of two snowmobilers and an expert cardiac catheterization team, he is back home recovering with his wife and five children.