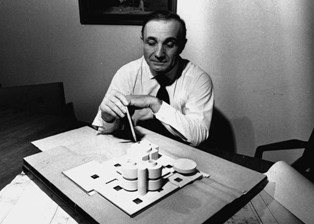 Dr. Edmund D. Pellegrino, educational innovator and a founder of the field of bioethics, conceived

“Dr. Pellegrino was a trailblazer whose vision helped shape what has grown to become the educational, research and clinical entity of Stony Brook Medicine,” said Kenneth Kaushansky, MD, MACP, Vice President for the Health Sciences and Dean of the School of Medicine. “We are sad about his passing but grateful for what he gave to Stony Brook and the field of academic medicine at large.”

According to a 1996 history of the Health Sciences Center, Dr. Pellegrino’s academic plan “went beyond the listing of dates, programs, people, space and equipment.” The document summarizes his plan as one that created the “Health Sciences Center to emphasize the breadth of ideas on which the center was built. The plan included his concepts about the relation of the center to the University and the classical, liberal disciplines. The plan advocated unique degrees of interdisciplinary and interprofessional cooperation and early introduction to patient care. It called for the teaching of basic science to all students by a single faculty.”

Dr. Pellegrino’s academic plan also emphasized the importance of building Stony Brook’s educational and clinical services around population health for the entire Long Island region, a concept that remains a core part of the mission of Stony Brook Medicine.

“Dr. Pellegrino’s experiences in previous academic positions shaped his conceptualization of the Stony Brook Health Sciences Center and academic plan that he wrote, which guided the inception and development of the Health Sciences schools and University hospital,” said Daniel M. Fox, Professor of Humanities and Social Science in Medicine Emeritus and Assistant Vice President (Academic Affairs) under Drs. Pellegrino and his successor, J. Howard Oaks.

“He was truly a man before his time and an innovator in medical education,” added Norman H. Edelman, MD, Professor of Preventive and Internal Medicine, and a former Dean of the School of Medicine. “His forward thinking and vision promoted collaborative education as a precedent for collaborative practice among various health professions.”

Faculty and staff who knew and worked with Dr. Pellegrino at Stony Brook said the creation of the Health Sciences Center illustrated his commitment to primary care and interdisciplinary education. The space and proximity of the two towers reflected an academic plan for interdisciplinary education, which initially included the Schools of Medicine, Dental Medicine, Nursing, Allied Health (now the School of Health Technology and Management), Social Welfare, and Basic Health Sciences (subsequently integrated into the School of Medicine).

Dr. Pellegrino’s career, which spanned more than 60 years, grew increasingly centered on medical ethics. A pioneer in establishing the field of bioethics, Dr. Pellegrino received many international awards. He served on the International Bioethics Committee of UNESCO and was chair of the President’s Council on Bioethics from 2005 to 2009. In his 90s, he was still mentoring students, attending rounds at MedStar Georgetown University Hospital, writing articles, and speaking nationally and internationally.

“Ed Pellegrino was a voice of moderation, warning against a clinical ethics based entirely on patient autonomy,” said Stephen Post, PhD, Director of Stony Brook’s Center for Medical Humanities, Compassionate Care and Bioethics, who interacted with Dr. Pellegrino on bioethics issues for the past 25 years. “He advocated for a model of shared decision making in which clinicians would offer their best recommendations to patients, rather than simply abandon patients to their autonomy without much discussion about their best interests.”

Before coming to Stony Brook, Dr. Pellegrino served as founding Chair of Medicine at two academic medical centers, Hunterdon Medical Center — a regional campus affiliated with New York University — and the University of Kentucky at Lexington.  After leaving Stony Brook, he was a leader in integrating education, practice, research and community service as Vice President for Health Affairs at the University of Tennessee at Memphis, and the first President of Yale-New Haven Medical Center, merging Yale’s health science schools with New Haven’s oldest charitable hospitals.

He subsequently served as President of The Catholic University of America and spent the last three decades of his career at Georgetown University, where he drew on his experience in medicine and philosophy in leading the Center for Clinical Bioethics.

For photos of Dr. Pellegrino at Stony Brook, see this  Facebook page
.

Dr. Pellegrino is survived by five children, two grandchildren and a great-grandchild.