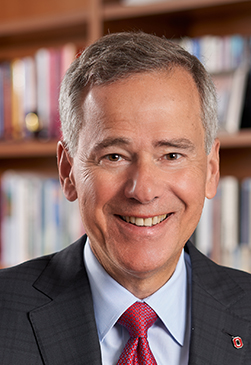 Paz will report to President McInnis and is a member of her senior leadership team. As EVP for Health Sciences, he will work in partnership with academic, hospital and clinical leadership and with community partners to ensure the continued development of a premier academic medical center and health system.

As executive vice president and chancellor for health affairs at The Ohio State University, where he is a professor of medicine and public health sciences, Paz is responsible for seven health science colleges including more than 20 research institutes and an NCI-designated comprehensive cancer center. He also serves as CEO of the Ohio State Wexner Medical Center, a health system that includes seven hospitals, 16 network hospitals, more than 100 outpatient sites, a multispecialty practice, an accountable care organization and a health plan.

“Hal has a vision of growth for Stony Brook Medicine that integrates our clinical, educational, research and service missions,” said President Maurie McInnis. “In a time of great transformation in the health care and social environments, his distinct experience will enhance our position as a world-class leader in research and innovation.”

Currently serving on the National Academy of Medicine’s Leadership Consortium and the board of directors of Research!America, Paz brings nearly 25 years of leadership in health care and academic medicine to Stony Brook University. Prior to joining Ohio State, he was the executive vice president and chief medical officer for CVS Health/Aetna where he provided clinical leadership for the company’s domestic and global businesses. He was also a professor adjunct of internal medicine at Yale University School of Medicine. Prior to his experience in the private sector, Paz served as senior vice president for health affairs, dean of the college of medicine at Pennsylvania State University, and CEO of the Penn State Hershey Medical Center and Health System.

“It is my privilege to join Stony Brook University during a time of strategic growth and tremendous opportunity,” said Paz. “Together with partners across the university and community, I believe we can set new standards for excellence in care, research, education and innovation.”

Dr. Paz received his bachelor’s degree from the University of Rochester, a master of science in life science engineering from Tufts University and his medical degree from the University of Rochester School of Medicine and Dentistry. He completed his residency at Northwestern University, where he served as chief medical resident. Dr. Paz was a Eudowood Fellow in pulmonary and critical care medicine at Johns Hopkins Medical School. In addition, he was a postdoctoral fellow in environmental health science at Johns Hopkins School of Hygiene and Public Health.

Paz succeeds Dr. Kenneth Kaushansky, who retired from his position as Senior Vice President of the Health Sciences in June 2021.

Stony Brook University, widely regarded as a SUNY flagship, is going far beyond the expectations of today’s public universities. With more than 26,000 students, 2,700 faculty members, nearly 200,000 alumni, an academic medical center and 18 NCAA Division I athletic programs, it is one of only four University Center campuses in the State University of New York (SUNY) system. The University embraces its mission to provide comprehensive undergraduate, graduate, and professional education of the highest quality, and has been ranked among the top 35 public universities in the nation by U.S. News & World Report. Fostering a commitment to academic research and intellectual endeavors, Stony Brook’s membership in the Association of American Universities (AAU) places it among the top 65 research institutions in North America. The University’s distinguished faculty have earned esteemed awards such as the Nobel Prize, Pulitzer Prize, Indianapolis Prize for animal conservation, Abel Prize and the inaugural Breakthrough Prize in Mathematics. Part of the management team of Brookhaven National Laboratory of the U.S. Department of Energy, Stony Brook is one of only eight universities that has a role in running a national laboratory. Providing economic growth for neighboring communities and the wider geographic region, the University totals an impressive $7.23 billion in increased economic output on Long Island.

Leave a Reply to Mercyhurst U. Names New President; U. of Maryland-Baltimore County’s President to Step Down Next Year - R1 NEWS Cancel reply