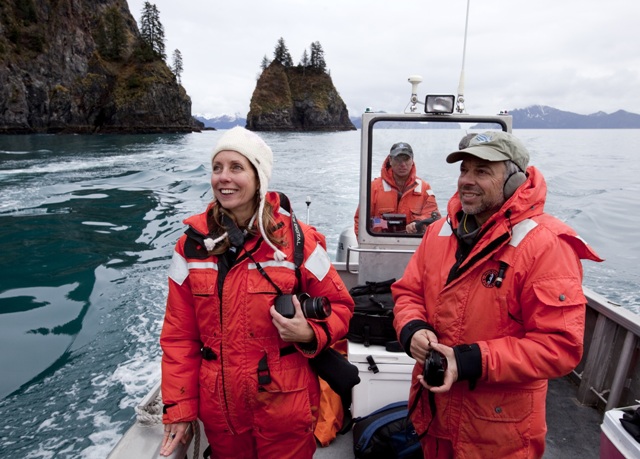 
ANCHORAGE, Alaska, June 4, 2013 – On June 7, an international team of scientists, artists and educators will launch an expedition to study the global marine debris crisis from one of the most breathtaking places on the planet: southwest Alaska. The Gyre project is a collaboration between the Anchorage Museum and Alaska SeaLife Center, in partnership with several national and Alaska-based organizations.

The Research Vessel Norseman will depart from Seward on Friday, June 7, and travel 450 nautical miles west from Resurrection Bay along the Kenai Peninsula coast, then cross the Kennedy Entrance channel to Shuyak and Afognak islands. Along the way, the crew will stop to observe,


document and collect shoreline trash. The expedition will end with an intensive cleanup of Hallo Bay in Katmai National Park, a remote area that has experienced an influx of debris from the 2011 Japanese tsunami.

“I have strongly mixed feelings about this expedition,” says Carl Safina. “I am hugely looking forward to a trip-of-a-lifetime to some of the planet’s best remaining places with some of the planet’s most committed people. It’s such an honor. On the other hand, how sad it is that garbage and debris are what is calling us to wild shores, that massive windrows of trash are the new sirens. How tragic that civilization has not yet made a better deal with the world. But we will do our job, which is to bear witness. And to witness bears. And to say what is, and offer a vision of what could be.”

This expedition is the first phase of the Gyre project. Phase two culminates in a 7,500-square-foot “Gyre” art and science exhibition on view at the Anchorage Museum from February through September, 2014. The exhibition will tell a global marine debris story through the work of more than 20 artists from around the world, including Los Angeles’ Cynthia Minet, who re-purposes plastic containers into life-size animal sculptures, and San Francisco’s Susan Middleton, who photographs the effects of marine debris on animals.

An exhibition section specific to Alaska will feature the 2013 expedition’s resulting scientific discoveries, as well as art created from trash gathered on Alaska’s beaches during the journey. The exhibition will incorporate content from the Burke Museum’s “Plastics Unwrapped” exhibition, offering a scientific and cultural history of how plastics are used in our daily lives.
Following its Anchorage debut, the “Gyre” exhibition will be repackaged by the Smithsonian Institution for a tour of the continental U.S.

About the Anchorage Museum

The Anchorage Museum is the largest museum in Alaska and one of the top 10 most visited attractions in the state. The museum’s mission is to share and connect Alaska with the world through art, history and science.

About the Alaska Sealife Center

The Alaska SeaLife Center in Seward is a private, nonprofit marine science facility dedicated to generating and sharing scientific knowledge to promote understanding and stewardship of Alaska’s marine ecosystems.

About the Blue Ocean Institute

Blue Ocean Institute inspires a deeper connection with nature by creating an original blend of science, art, and literature. Our solution-oriented books, films, and programs instill hope and help restore living abundance to the sea.


Tons of trash from land and boats constantly finds its way into bodies of water. This marine debris — mostly plastic  — cannot dissolve and survives in oceans for decades.

Marine debris is not just an unsightly mess: It kills. Every day, marine debris kills sea birds, whales, fish, dolphins, seals, turtles and manatees that either mistake the debris for food or become entangled and often strangled.

Much of the oceans’ trash is swirling in one of five gyres, which are large systems of rotating ocean currents. Gyres can be up to thousands of miles in diameter. These gyres redistribute ocean trash. Alaska’s shores are on the northern fringe of the North Pacific Gyre, which is associated with the Great Pacific Garbage Patch, a vast area of garbage estimated to be the size of Mexico.

5 million tons
Japanese government’s estimate of how much debris the 2011 tsunami swept into the ocean (NOAA).

There is currently no accurate estimate of how much marine debris is in our oceans. The marine debris problem is so vast and complex, it’s been challenging for the scientific community to study in a comprehensive, global way (NOAA).