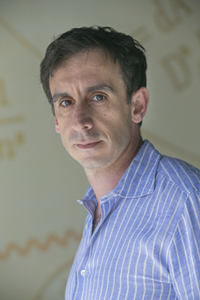 
STONY BROOK, NY, May 2, 2013 – Two Stony Brook University professors – Leonardo Rastelli, PhD and Sheila Silver, PhD – have been named 2013 Guggenheim Fellows based on distinguished achievement in the past and exceptional promise for the future. The fellowships, often called “midcareer” awards, are intended for men and women who have already demonstrated exceptional capacity for productive scholarship or exceptional creative ability in the arts.

In the 89th annual John Simon Guggenheim Memorial Foundation competition for the United States and Canada, Rastelli, Associate Professor in the Yang Institute for Theoretical Physics and the Department of Physics and Astronomy, and Silver, Director of Undergraduate Studies and Professor, Department of Music, were selected as part of a diverse group of 175 scholars, artists, and scientists on the basis of prior achievement and exceptional promise. They were chosen from among almost 3,000 applicants.

Rastelli, who was selected for the fellowship in the category of Natural Sciences, received his PhD in 2000 from MIT. He was a postdoc and Assistant Professor at Princeton before joining Stony Brook in 2006. He works on string theory and quantum field theory.

“I am very honored by this recognition,” Rastelli said. “I am both proud and intimidated to appear in the same list as the illustrious colleagues who received the fellowship before.”

Rastelli’s Guggenheim project is called The Superconformal Bootstrap Program. “The general idea of the ‘bootstrap’ is that physical theories must obey stringent consistency conditions,” Rastelli said. “In collaboration with a very talented group of students and postdocs, I plan to apply the modern bootstrap program to theories that have a high degree of symmetry; they are both conformal (which means that they have no intrinsic length scale) and supersymmetric. Supersymmetry is a symmetry that relates ‘bosons’ and ‘fermions.’ It is a very powerful symmetry – many important discoveries about it were made at Stony Brook. This approach gives insight into certain aspects of physical theories for which no other computational scheme is available.”


Silver was selected in the field of Creative Arts/Music Composition. She has written in a wide range of mediums, from solo instrumental works to large orchestral works; from opera to feature film scores. For the past few years, Silver has been composing primarily for the voice and for opera. In 2007 she received the Raymond and Beverly Sackler Prize in Music Composition for Opera to compose her opera, The Wooden Sword, which premiered in 2010.  Also premiering in 2010 was The White Rooster, A Tale of Compassion, commissioned by the Smithsonian’s Freer and Sackler Galleries for the exhibit In the Realm of the Buddha, a dramatic cantata composed for the vocal ensemble Tapestry, plus six Tibetan singing bowls and frame drums. She is now completing Beauty Intolerable, a Songbook based on the poetry of Edna St. Vincent Millay, composed in collaboration with American Opera Projects and the Edna St. Vincent Millay Society, which will premiere this June in New York City.

Her Guggenheim Fellowship was awarded for work on her next opera, A Thousand Splendid Suns, based on the international best-selling novel by Khaled Hosseini, author of The Kite Runner. In May, Silver will begin, with her family, a six-month stay in Pune, India, studying Hindustani music in preparation for beginning her new opera. She will study Hindustani music with master singer, Narayan Bodas, and also will study the tabla, a percussion instrument used in Hindustani classical music. “I want my Western voice to have some of the color – feel – of Hindustani music because this is at the heart of Afghan music,” she said. While in India, Silver also will be working with her librettist, Stephen Kitsakos, Professor of Theater at SUNY New Paltz, to complete the first draft of the opera’s libretto.

Since its establishment in 1925, the Guggenheim Foundation has granted over $306 million in Fellowships to more than 17,500 individuals, among whom are scores of Nobel laureates, poets laureate, winners of Pulitzer Prizes, Fields Medals, and of other important, internationally recognized honors.

“These artists and writers, scholars and scientists, represent the best of the best,” Edward Hirsch, president of the Foundation, said of the 175 new Guggenheim fellows. “Since 1925, the Guggenheim Foundation has always bet everything on the individual, and we’re thrilled to continue the tradition with this wonderfully talented and diverse group. It’s an honor to be able to support these individuals to do the work they were meant to do.”