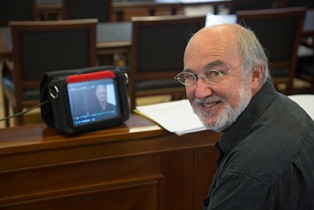 
STONY BROOK, NY, September 10, 2013 – Graham Chedd, an acclaimed science documentary film producer, editor and writer, has joined the faculty as a Visiting Professor for the Alan Alda Center for Communicating Science in the School of Journalism at Stony Brook University.  Chedd, who helped found NOVA in 1974, has worked with actor and science advocate, Alan Alda, producing PBS’ Scientific American Frontiers, and in creating the series The Human Spark, which won the 2010 AAAS/Kavli Prize for in-depth television science reporting.

Chedd will be working closely with the Alda Center to develop its nationwide science communication workshops and in expanding its programs. He is also co-teaching classes for science graduate students at Stony Brook University on Distilling Your Message, and developing a science documentary production class for the Spring semester.

Graham Chedd has been working with Alan Alda for over 20 years and shares his passion for communicating science in an engaging and thoughtful way.  Working together on PBS’ Scientific American Frontiers, Chedd and Alda interviewed hundreds of scientists from around the world.  “Graham has been the producer of every science show I’ve done,” says Alda, “which has been a crucial element in those shows’ winning so many awards. His deep understanding of how best to communicate science is invaluable. We’re very lucky he’s agreed to work with us.”

This week, Alda and Chedd have a new project coming out, a two-part PBS program, Brains on Trial, being broadcast Wednesday, September 11 and 18, 2013, 10-11 p.m. on PBS (check local listings).  Brains on Trial details breaking neuroscience research that could within a few years begin to find its way into the nation’s courtrooms.  It poses the controversial question: How should our rapidly expanding ability to peer into people’s minds and decode their thoughts and feelings affect the criminal justice system?

The Alan Alda Center for Communicating Science works to enhance understanding of science by helping train the next generation of scientists and health professionals to communicate more effectively with the public, elected officials, the media, and others outside their own discipline.