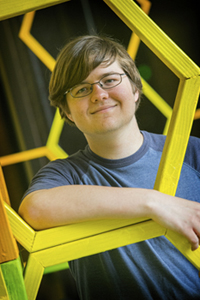 STONY BROOK, NY, May 13, 2013 – Stony Brook University student Peter Giattini has been named a Goldwater Scholar, one of the most prestigious honors given nationally to college undergraduate students. Presented by the Barry M. Goldwater Scholarship in Education Foundation for the 2013-2014 academic year, the award will cover the cost of tuition, fees, books and room and board up to a maximum of $7,500 per year for up to two years. Giattini is the 32nd Stony Brook University student to be named a Goldwater Scholar since 1992.

Giattini, 21, a junior chemistry and mathematics major from New Hyde Park, NY, is a member of the Nancy Goroff Research Group in the Department of Chemistry whose research focuses on organic synthesis with a goal of creating organic solar cells that can better absorb and capture the energy of the sun. He is a member of the University Scholars Program (Class of 2014) and serves as an undergraduate teaching assistant for organic chemistry. He is the recipient of the Undergraduate Research & Creative Activities (URECA) Summer Research Award (2012) and the Sei Sujishi Prize from the Department of Chemistry (2011).

“The things I love about math and chemistry actually kind of come together,” said Giattini. “In chemistry, we do synthesis, which is how can I rationally plan out the design of a molecule. In math we do things like proof, which is how can I rationally defend a statement,” he said. “In both senses we take simple building blocks and apply rules of logic and bring them together. In math it’s rigorous – I build a solid pyramid of logic; in chemistry it can be messy, because sometimes things don’t work out the way you expect them to.”

“Peter is a remarkable student, and a pleasure to have in the lab,” said Nancy Goroff, Associate Professor, Department of Chemistry. “I look forward to watching what he accomplishes in the future.”

Next year Giattini plans to continue his research in Dr. Goroff’s lab and work as a teaching assistant before attending graduate school. He would like to pursue a career in academia as a university professor which would allow him to continue conducting research and working with students.

Announced by Mrs. Peggy Goldwater Clay, Chair of the Board of Trustees of the Barry M. Goldwater Scholarship and Excellence in Education Foundation, a total of 271 Goldwater Scholarships for 2013-2014 were awarded to undergraduate sophomore and juniors on the basis of academic merit from a field of 1,107 mathematics, science and engineering students who were nominated by the faculty of colleges and universities nationwide.


About the Barry M. Goldwater Scholarship and Excellence in Education Program

The Barry M. Goldwater Scholarship and Excellence in Education Program was established by Congress in 1986 to honor Senator Barry M. Goldwater, who served his country for 56 years as a soldier and statesman, including 30 years of service in the U.S. Senate. The purpose of the Foundation is to provide a continuing source of highly qualified scientists, mathematicians and engineers by awarding scholarships to college students who intend to pursue careers in these fields. Goldwater Scholars have impressive academic qualifications. Recent Goldwater Scholars have been awarded 80 Rhodes Scholarships, 118 Marshall Awards, 110 Churchill Scholarships and numerous other distinguished fellowships.


Part of the State University of New York system, Stony Brook University encompasses 200 buildings on 1,450 acres. Since welcoming its first incoming class in 1957, the University has grown tremendously, now with more than 24,000 students and 2,200 faculty. Its membership in the prestigious Association of American Universities (AAU) places Stony Brook among the top 62 research institutions in North America. U.S. News & World Report ranks Stony Brook among the top 40 public universities in the nation and Kiplinger named it the 22nd best value in public colleges for in-state students and 9th for out-of-state students. One of four University Center campuses in the SUNY system, Stony Brook University co-manages Brookhaven National Laboratory, putting it in an elite group of universities that run federal research and development laboratories. As the largest single-site employer on Long Island, Stony Brook is a driving force of the regional economy, with an annual economic impact of $4.65 billion, generating nearly 60,000 jobs, and accounts for nearly 4% of all economic activity in Nassau and Suffolk counties, and roughly 7.5 percent of total jobs in Suffolk County.