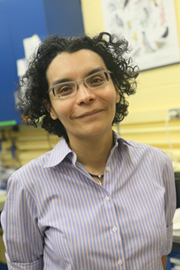 STONY BROOK, NY, November 7, 2012 – In a new study published in the journal Ecology and Evolution, researchers show that rising sea levels produced by deglaciation, or the melting of glaciers, caused the extinction of most bats in the Caribbean Islands, including the Cuban vampire and Puerto Rican flower bats. The article, entitled, “Deglaciation explains bat extinction in the Caribbean,” led by Assistant Professor Liliana M. Dávalos, PhD, from the Department of Ecology and Evolution at Stony Brook University, shows that deglaciation drowned vast expanses of low-lying islands.

According to Professor Dávalos and her colleague Amy L. Russell, PhD, Assistant Professor, Department of Biology at Grand Valley State University in Michigan, the high extinction rate following deglaciation in the Caribbean has been noted for decades and rich fossil deposits in the Bahamas and the Greater Antilles attest to a fauna that no longer exists. Among mammals, most terrestrial species were wiped out around the time humans arrived, and many bat populations that existed elsewhere went extinct (e.g., Cuban vampire bat, Puerto Rican flower bat, etc.) on one or several islands. The many instances of both extinction and persistence of bats across dozens of islands made it an ideal system for investigating how climate change may shape island fauna.

The researchers used deep sea-bathymetry (measurement of underwater depth) and Geographic Information Systems (GIS) to model the extent to which land would have been exposed in the Caribbean at the peak of the glaciation, when sea levels were 125 meters below their current levels. Combining the record of current and fossil bats with the area for each island, they then used a simple mathematical relationship between the number of species and area of an island to estimate the number of local extinction events that could be explained by the change in area.

Together, they found that most of the species loss in the Bahamas and Greater Antilles could be explained by the loss of area caused by rising sea levels. In the Lesser Antilles the mathematical models pointed out gaps in the fossil record of most islands. The large impact of area loss on species loss held, even after excluding species that may have colonized the islands recently and accounting for coral growth in the Bahamas.

“There have been many explanations before as to why so many bat populations collapsed: cave drowning, the arrival of new species, lack of tolerance to the warmer and wetter climate of the Holocene are examples,” said Professor Dávalos.

“We were expecting area loss to be important in explaining extinction, but not as important as we found. This drives home the point that rising sea levels pose great risks to biodiversity today,” Professor Russell said.

Editors’ Note: This work was funded in part by the National Science Foundation.