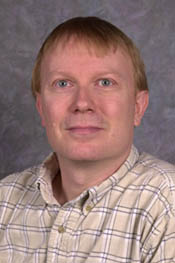 Cited for his contributions to geometric computing and approximation algorithms

STONY BROOK, NY, March 2, 2012 – Joseph S.B. Mitchell, PhD, Professor in the Department of Applied Mathematics & Statistics and Research Professor of Computer Science at Stony Brook University, was among only 46 fellows selected by the Association for Computing Machinery (ACM) for 2011. ACM selected Professor Mitchell and his colleagues for their contributions in providing fundamental knowledge to the computing field and generating multiple technological advances in industry, commerce, healthcare, entertainment and education.

“Professor Mitchell is one of the country’s leaders in computational geometry,” said Dennis N. Assanis, Provost and Senior Vice President for Academic Affairs. “His work in studying the design, analysis and implementation of efficient algorithms to solve geometric problems exemplifies the type of world-class research occurring every day at Stony Brook University.”

ACM cited Mitchell for his “contributions to geometric computing and approximation algorithms.” His particular interest is in applications to problems in computer graphics, visualization, robotics, manufacturing, geographic information systems and computer vision. Currently, a major application he is working on is to assist air traffic controllers reroute airplanes around inclement weather.

“These women and men, who are some of the leading thinkers and practitioners in computer science and engineering, are changing how the world lives and works,” said Alain Chesnais, President, ACM. “They have mastered the tools of computing and computer science to address the many significant challenges that confront populations across the globe. These international luminaries are responsible for solutions that are transforming our society for the better – in healthcare, communications, cybersecurity, robotics, commerce, industry and entertainment.”  ACM will formally recognize Professor Mitchell and other 2011 ACM Fellows at its annual awards banquet scheduled for June 16, 2012, in San Francisco, California.

Mitchell received both his BS (Physics and Applied Mathematics) and MS (Mathematics) from Carnegie Mellon University in 1981, and his PhD from Stanford University in 1986. He is a former Fulbright Scholar, a past recipient of the National Science Foundation Presidential Young Investigator Award and recipient of the President’s Award for Excellence in Scholarship and Creative Activities. In 2010, he shared the Gödel Prize, awarded to those with outstanding papers in theoretical computer science.