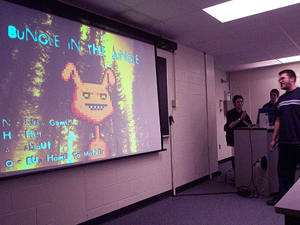 Alex Turner, the current C# compiler project manager at Microsoft, showcases his game in a past Game Programming Competition at Stony Brook University.

STONY BROOK, NY, May 1, 2013 – On Friday, May 17, at 5 pm in the Charles B. Wang Center Theater, the Stony Brook University Computer Science Department is hosting its 10th Annual Game Programming Competition.

Held each spring, at each event, current Stony Brook students present and play their original games for the audience and competition judges, who select a winning team. The event judges this year are Stony Brook alumni who now work as industry professionals at game development companies such as Activision, Applied Visions, Artizens, Inc., Cryptic Studios, EduWare, Kuma Games, Onslaught Studios, Rockstar, and Zynga. While game entries in the competition are limited to current Stony Brook students, the event itself is open to the public free of charge.

In addition to working in the game industry on projects including The Sims, Skylanders, Geometry Wars, Star Trek Online, and Blue Mars, students from previous Game Programming competitions at Stony Brook have also gone on to work at places like Google, Microsoft, Apple, Amazon, and the NSA. Others have started their own game companies, like Artizens, Inc. and Onslaught Studios.

Games entered in the competition come from all different game genres and were developed for a number of platforms including Windows, Android, and iOS.

According to Richard McKenna, coordinator of the Game Programming Competition from the Computer Science Department at Stony Brook University, each year brings greater participation and better games. “This year looks to be the best event yet,” he said.

Q. What do you think the students learn from this competition?

This is a “Game Programming” Competition, which means students learn about and implement the technologies used to build games. We’re talking game engines and frameworks, level editors, sound design tools, etc., but students also learn other practical things. Students learn about game design and play-testing and how to use an iterative design and prototyping process to make an original idea a reality. Students also learn about how to work on a team with other developers and how to combine efforts to produce something better than one could do working alone.

Q. What makes this a unique and fun competition?

These are original student creations. These are not copies of existing games, but original works, and students present their original creations to the audience, who respond with cheers, laughter, and approval. The audience has fellow students, professional game developers, faculty, friends, family, and interested members of the community. Students work extremely hard on their original creations and are fully invested emotionally in their work. The sharing of this work with the audience is nerve wracking and exciting to the presenters and inspiring to the attendees, many of whom leave the event with plans to develop and enter their own games for the following year.

Q. Are there any others like it anywhere that you know of?

There are lots of game DEVELOPMENT competitions around like the Independent Games Festival, but I’m not familiar with many game PROGRAMMING competitions (subtle difference I know, some might say it’s just semantics). There are some at different Universities, but ours appears to be one of the oldest, if not the oldest.