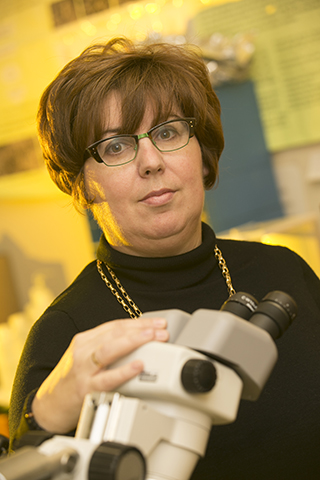 Stony Brook, NY, December 13, 2013– Pelagia-Irene (Perena) Gouma, Ph.D., a Professor in the Department of Materials Science & Engineering at Stony Brook University received The American Ceramic Society’s 2013 Richard M. Fulrath Award, an honor that recognizes both American and Japanese ceramic engineers and scientists for their excellence in research and development of ceramic sciences and materials. Gouma was honored for her novel ceramics for biosensors and olfaction, which includes her invention of a single breath, hand-held portable ammonia and other gas breathalyzers.

The Director of the Center for Nanomaterials and Sensor Development at Stony Brook, Prof. Gouma’s research focuses on selective chemical detectors, biosensors and hybrid nanoprobes for electronic olfaction systems (electronic “noses”) and nanomedicine applications. Prof. Gouma has also developed a handheld breathlyzer for diabetics which would enable the user to simply blow into the device to monitor blood sugar, rather than the painful process of pricking a finger.

The Richard M. Fulrath Award is named for a renowned professor at University of California at Berkeley and promotes technical and personal friendships between researchers from the US and Japan. Each year awardees are named in five different categories: US academic; Japanese Academic; US Industrial; and a Japanese Industrial. Gouma was named as the US Academic awardee.

“It is a great honor to have been chosen for this award and to have been recognized by my peers,” said Gouma. “The field of ceramic sciences and materials holds boundless potential for so many valuable technologies in the future.”

“I am very proud of Professor Gouma on the receipt of the 2013 Richard M. Fulrath Award,” said Yacov Shamash, Dean of the College of Engineering and Applied Sciences. “She is a leader in the area of nanomaterials for new miniature sensors and this prestigious award recognizes her international stature in the field and her accomplishments.”

Professor Gouma is a Fulbright Scholar; she has been Visiting Faculty/Scientist at various institutions around the world, including NIMS (Japan), Univ. of Brescia (Italy) and ETH (Zurich). She has been guest faculty at Lawrence Berkeley National Laboratory and Brookhaven National Laboratory and currently holds five US Patents, with approximately 30 additional patents pending.  She has been published in more than 110 peer-reviewed publications, has authored 15 book chapters and a monograph. Currently, she serves as an Associate Editor for JACERS and sits on the editorial board of several other publications. She holds a B.S. degree in Applied Physics from the Aristotelian University of Thessaloniki, Greece, an M.S. in Advanced Engineering Materials and an M. Phil. in Organizational Management, both from the University of Liverpool (UK); and a Ph.D. in Materials Science & Engineering from the University of Birmingham (UK). Prior to joining SBU, she was a Research Scientist at Ohio State University. Her research has been featured in social and mainstream media, magazines, Scientific American and other national publications.