What Was Old is New Again: SBU Commemorates the Opening of Frey Hall – A High Tech-Dedicated Classroom Building 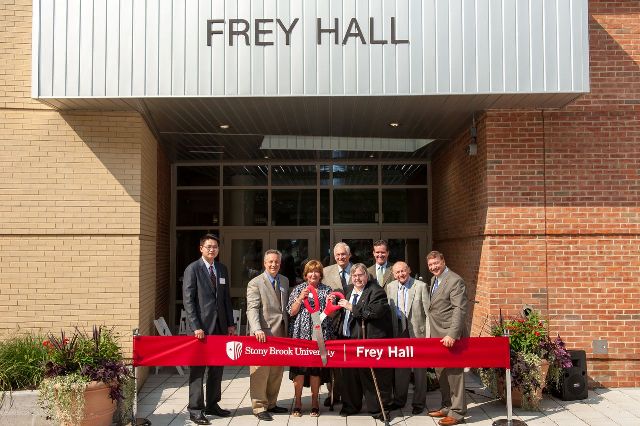 What Was Old is New Again: SBU Commemorates the Opening of Frey Hall – A High Tech-Dedicated Classroom Building

STONY BROOK, NY, August 16, 2013 – Stony Brook University cut the ribbon of Frey Hall, commemorating the opening of the first building dedicated solely to classroom space on the Long Island campus. Stony Brook President Dr. Samuel L. Stanley Jr. was joined by Dr. Robert Frey and his wife Kathryn, academic leadership, faculty and staff from across the University, and elected officials including Sen. John Flanagan and Assemblyman Steve Englebright, to celebrate the $31M, 95,000 square-foot renovation project that began in March 2011. The project, designed by architectural firm EwingCole to meet the U.S. Green Building Council’s LEED Silver Certification, converted one of the oldest buildings on the campus known as “Old Chemistry” (construction for which began in 1962) into a modern new teaching facility with 1,971 seats (including three new 250 seat lecture halls), 27 new classrooms and creative new teaching space, which, combined, will host nearly 240 courses this fall.

Named to honor Dr. Robert Frey and the Frey Family Foundation in grateful recognition of their 35-year commitment to Stony Brook University, the new classroom building incorporates several signature teaching and learning with technology (TLT) features, including an “Active Learning Center” and a “Testing Center.”  The Active Learning Center is a 180-seat classroom space organized around tables of six in which an instructor and teaching assistants lead the students through cooperative learning, problem-based learning and team- problem solving exercises in a media intense environment. The Testing Center is a relatively new concept in higher education, slated to come online in spring 2013, in which space is dedicated solely to electronic testing and features special facility accommodations for eligible students such as those who are hearing or sight impaired.

“Robert’s connection to and investment in Stony Brook runs deep and personal,” said Dr. Stanley. “It includes almost every role imaginable, from teaching and research to philanthropy and indeed, bricks and mortar, having accomplished something no other who came before him was able to do – he built a 135-room Hilton Garden Inn on campus. I cannot emphasize enough how important – how significant – his contributions to the campus community have been.”

After securing his bachelor’s in Applied Mathematics and Statistics from Stony Brook in 1980, Dr. Frey demonstrated his commitment to his alma mater while building a career that spanned such notable institutions as the IRS, Doubleday Book Co., European American Bank, Morgan Stanley, Renaissance Technologies and sustained that commitment as he branched off into his own businesses, Harbor Financial Management and Frey Quantitative Strategies. His first foray into teaching at SBU was as an assistant professor in the Psychology Department, then in the Education and Special Development Department, followed by the Institute for Pattern Analysis, and as a Research Professor in the Applied Math and Statistics Department, an appointment he has held since 2004.

In 2008, the Frey Family Foundation established the Frey Endowed Chair and Professorship in Quantitative Finance in the Department of Applied Mathematics and Statistics in the College of Engineering and Applied Sciences at Stony Brook and also established the Frey Scholarship for the College. Dr. Frey is a continuing member of the College of Engineering and Applied Sciences Dean’s Council and a former Stony Brook Foundation Trustee. In addition, the Freys’ generous support has touched a wide variety of programs on campus, from athletics, student scholarships, to alumni affairs and the hospital. A Distinguished Alumni Award recipient, Robert and his wife Kathryn have taken leadership roles in:  Mather Hospital, Port Jefferson Board of Education, Mt. Sinai Board of Education, Hope House Ministries, Suffolk County College Foundation, Alliance of Guardian Angels and the Royal Foundation.

“We are deeply honored to be recognized today; I feel like I should be thanking Stony Brook,” said Dr. Frey at the ribbon cutting ceremony. “Stony Brook changed my life. This University is engaged in such a noble mission; one that has changed so many lives, transforming students through research and education. I too am better because of Stony Brook.”

“Frey Hall is a state-of-the-art multimedia equipped classroom building designed to meet the current technological needs of our faculty and students,” said Dennis N. Assanis, Provost and Senior Vice President for Academic Affairs. “It is evident that Frey Hall exemplifies the classroom of the future, in that, it will inspire and allow for new academic innovations.”

Frey Hall: About The Project Design

Frey Hall was designed to strengthen the visual and social LINKS between the Student Activities Center to the south and the Chemistry Building to the north, Frey Hall reinforces the edge of the existing campus green, while its walls of lattice for climbing plants create an active dialog between nature and the built environment. The interior architecture, including the new central atrium, was designed to foster a sense of community and common identity for both students and faculty. The interior layout facilitates collaboration, is active and engaging, and encourages informal interaction. A variety of types, sizes, public, and private meeting and gathering spaces address flexibility in use and configuration. The spaces enable state-of-the-art technologies and provide opportunities for collaborative learning that are active, experimental and based in group learning.

Designer and lead architect Charles Belson has some familiarity with the Stony Brook campus as he took a summer Physics class at Stony Brook in the 1970s, as a prerequisite for graduate school in architecture at Harvard. During the renovation project, his firm EwingCole helped him start Belson Design Architects, which has continued to consult on the project on behalf of EwingCole.

“What is so important is that Stony Brook has a proud history of taking a number of existing buildings from the 60s – known as ‘energy dinosaurs’ – and turning each of them into a high performance energy conserving building.”