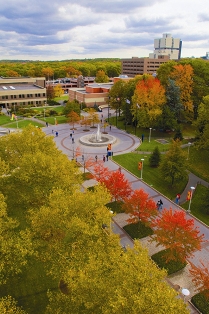 STONY BROOK, NY, August 28, 2012 – Stony Brook University has been included in the Fiske Guide to Colleges 2013 based on a broad range of subjects including academics, affordability, financial aid, quality of student life on campus, extracurricular activities, food, housing and more. The Fiske Guide to Colleges provides a selective, subjective and systematic look at more than 300 of the best and most interesting colleges and universities in the United States, Canada and Great Britain.

In its profile of Stony Brook University, the editors lauded the institution as one of the “academic leaders in the SUNY system,” one that “aims to be the model of a student-centered research university.” Fiske lists the natural sciences, engineering and the health sciences as the major drawing cards for the University.

Editors also noted that Stony Brook has become known for its highly competitive learning environment and its high-quality professors. Fiske lists anthropology, biology, computer science, engineering science, English, nursing, marine sciences and music as among the strongest program offerings. One Stony Brook student surveyed by Fiske described the University as the “complete package.” Another said it has “competitive academics” with “challenging classes.”

This is the latest recognition garnered by Stony Brook University by independent organizations. Stony Brook was named among the 75 best value colleges and universities by The Princeton Review and named the 35th best value in public colleges for in-state students (29th for out-of-state students) by Kiplinger’s Personal Finance. The University also received a ranking of 114th in the Times Higher Education 2011-2012 Top 400 World University rankings; received 23 Citations in the U.S. News & World Report
“America’s Best Graduate Schools” report for 2012; and ranked 111th out of more than 1,500 of the nation’s four-year colleges and universities in the U.S. News & World Report
“National University Rankings” for 2012.


Part of the State University of New York system, Stony Brook University encompasses 200 buildings on 1,450 acres. In the 50+ years since its founding, the University has grown tremendously, now with nearly 25,000 students and 2,200 faculty members and is recognized as one of the nation’s important centers of learning and scholarship. It is a member of the prestigious Association of American Universities (AAU), and co-manages Brookhaven National Laboratory, joining an elite group of universities, including Berkeley, University of Chicago, Cornell, MIT, and Princeton that run federal research and development laboratories. SBU is a driving force of the Long Island economy, with an annual economic impact of $4.65 billion, generating nearly 60,000 jobs, and accounting for nearly four percent of all economic activity in Nassau and Suffolk counties, and roughly 7.5 percent of total jobs in Suffolk County.


About the Fiske Guide to Colleges


How do you single out the best and most interesting of the more than 2,200 four-year colleges in the United States? You rely on the resource that millions of parents, counselors, and college-bound students have turned to for more than 25 years – Fiske Guide to Colleges. Compiled by former New York Times education editor Edward B. Fiske, a top independent voice in college admissions, the Fiske Guide to Colleges 2013 provides valuable reviews on the best and most interesting colleges and universities.