New Study Reveals the Causes of Extinction from Global Warming 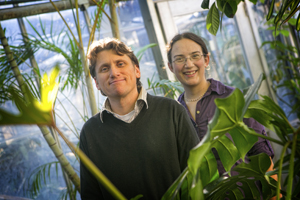 New Study Reveals the Causes of Extinction from Global Warming

Associate Professor John J. Wiens and PhD student Abigail Cahill, have co-authored a research paper, “How does climate change cause extinction?” published in the Proceedings of the Royal Society of London.

STONY BROOK, NY, October 16, 2012 – A new study, published online today in Proceedings of the Royal Society of London, reviewed 136 case studies to determine the underlying causes of why many populations have gone extinct due to changing climate.

The article, entitled “How does climate change cause extinction?” describes research led by John J. Wiens, an Associate Professor in the Department of Ecology and Evolution at Stony Brook University and by PhD students Abigail E. Cahill and Matthew E. Aiello-Lammens.

According to the authors, extinctions of plant and animal populations from human-related climate change are already widespread, but the causes of these extinctions are very poorly understood.

Contrary to expectations given global warming, the results of the study show

that very few populations have gone extinct simply because temperatures got too hot for the plants and animals to survive.

“Instead,” said Dr. Wiens, “climate change more often leads to local extinctions and declines by influencing interactions between species, such as reducing prey populations for predators. These shifting interactions may make even small climatic changes dangerous for the survival of plant and animal species. So, for example, many animals may starve to death because of climate change long before the climate gets hot enough for them to die from overheating.”