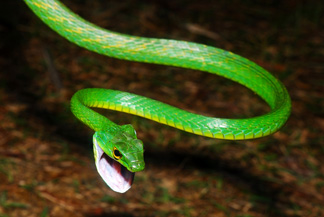 A new study, published online in Biology Letters on September 19, has utilized a massive molecular dataset to reconstruct the evolutionary history of lizards and snakes. The results reveal a surprising finding about the evolution of snakes: Most snakes we see living on the surface today arose from ancestors that lived underground.

The article, entitled “Resolving the phylogeny of lizards and snakes (Squamata) with extensive sampling of genes and species,” describes research led by John J. Wiens, an associate professor in the Department of Ecology and Evolution at Stony Brook University. The study was based on 44 genes and 161 species of lizards and snakes, one of the largest genetic datasets assembled for reptiles.

The results show that almost all groups of snakes arose from within a bizarre group of burrowing blind snakes called scolecophidians. This finding implies that snakes ancestrally lived underground, and that the thousands of snake species living today on the surface evolved from these subterranean ancestors.

The authors suggest that there are still traces of this subterranean ancestry in the anatomy of surface-dwelling snakes. “For example, no matter where they live, snakes have an elongate body and a relatively short tail, and outside of snakes, this body shape is only found in lizards that live underground,” said Wiens. “Snakes have kept this same basic body shape as they have evolved to invade nearly every habitat on the planet — from rainforest canopies to deserts and even the oceans.”