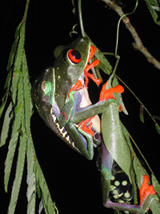 All tadpoles grow into frogs, but not all frogs start out as tadpoles, reveals a new study on 720 species of frogs to be published in the journal Evolution. The study, “Phylogenetic Analyses Reveal Unexpected Patterns in the Evolution of Reproductive Modes in Frogs,” led by John J. Wiens, an associate professor in the Department of Ecology and Evolution at Stony Brook University, and colleagues Ivan Gomez-Mestra from the Doñana Biological Station in Seville, Spain, and R. Alexander Pyron from George Washington University, uncovers the surprising evolution of life cycles in frogs.

Roughly half of all frog species have a life cycle that starts with eggs laid in water, which hatch into aquatic tadpoles, and then go through metamorphosis and become adult frogs. The other half, according to the authors, “includes an incredible diversity of life cycles, including species in which eggs are placed on leaves, in nests made of foam, and even in the throat, stomach or back of the female frog. There are also hundreds of species with no tadpole stage at all, a reproductive mode called direct development.”

For decades, it has been assumed that the typical mode (with eggs and tadpoles placed in water) gave rise to direct development through a series of gradual intermediate steps involving eggs laid in various places outside water. “However, the results show that in many cases, species with eggs and tadpoles placed in water seem to give rise directly to species with direct development, without going through the many seemingly intermediate steps that were previously thought to be necessary,” Wiens said.

“The results also suggests that there many potential benefits for species that have retained aquatic eggs and tadpoles, such as allowing females to have more offspring and to colonize regions with cooler and drier climates. These advantages may explain why the typical frog life cycle has been maintained for more than 220 million years among thousands of species,” said Wiens.