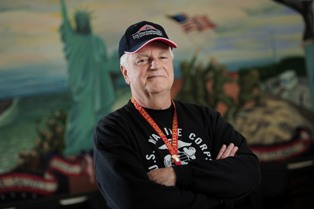 STONY BROOK, NY, November 8, 2012 – Eugene Roach of Lake Ronkonkoma served as a Marine, a member of the White House honor guard, and a New York City police officer, with a decorated career spanning nearly four decades. But nothing was as difficult as caring for his wife, Jeanie, the love of his life, after she was diagnosed with dementia in 2000. Fortunately, the Long Island State Veterans Home, part of Stony Brook University, offered a service that would prove not only helpful for his wife, but also a lifesaver for Eugene: Adult Day Health Care. Now, the ex-Marine is paying back his enormous debt of gratitude by volunteering three times a week to help others at the home.

A native of East Harlem and the Bronx, Roach joined the Marine Corps in 1961 and was selected to serve in the White House honor guard during John F. Kennedy’s presidency. He served on security details at Camp David, accompanied the President to Newport in the summer, and to Costa Rica during his two-year stint in Washington, DC.

Two years later, he married Jeanie Pelliccie, also a Bronx native. Together, they had four children, all of whom became police officers. Roach served 32 years with New York’s finest. But his world changed suddenly after 37 years of marriage when Jeanie was diagnosed with early onset dementia.

“She was the love of my life,” he said. “We were very close. We just liked to be together and do things.”

His wife was subsequently diagnosed with Alzheimer’s disease by a neurologist at Stony Brook University Hospital.

The first two years were not too difficult, he said, until his wife developed aphasia, a language disorder that results from damage to the brain. “That was very difficult for me,” he said. “Here was the love of my life, and I can’t communicate with her.”

Eventually, Roach himself became physically ill while trying to care for his wife at home. He developed arrhythmia, had two stents and a pacemaker implanted, and began suffering from depression. “It hit me all at once,” he said. “And it was from stress.”

With prompting from friends and family, he enrolled his wife in the Adult Day Health Care program at the Veterans Home. Once there, his wife’s medication was much better managed by Dr. Lori Bright-Long, a Clinical Assistant Professor in the Department of Psychiatry and Behavioral Science at Stony Brook University. And both he and his wife benefited from the home’s caring, attentive staff.

“I became very close to the staff,” Roach said. “They were very concerned about me. I was surprised about that – the level of genuine care. That’s what got me. Everyone loved what they were doing.”

Located on 25 wooded acres on Stony Brook University’s Medicine campus across from Stony Brook University Hospital, the 350-bed Veterans Home cares for 600 patients annually, including 80 patients in its Adult Day Health Care program. The program is one of the only adult day healthcare programs in the nation that is fully integrated into the health and educational mission of a major teaching and research university. The program accepts honorably discharged veterans from all branches of the United States Armed Forces. It also accepts spouses and widows of qualifying veterans, as well as Gold Star Parents, who require adult day health care. The program operates six days a week.

“The medical model of adult day healthcare is a comprehensive approach that combines medical, nursing and personal care services, along with social activities,” said Fred S. Sganga, MPH, FACHE, LNHA, Executive Director of the Veterans Home. “This multi-disciplinary approach provides an individualized plan of care tailored for each of our patients, and it is what sets us apart from other adult day healthcare programs.”

Roach knows firsthand the benefits of the program. He was so grateful for its services that after his wife passed away in March 2011, he began volunteering at the home four months later. Three days a week, he comes to visit patients and now has many friends there.

“When she passed away, I was in bad shape,” Roach said. “And then I said, ‘Let me go back.’ That was the best thing I ever did. I had a new outlook on life, a new set of friends. It made me a whole lot better. I just can’t say enough good things about the place.”

If he had to do it all over again, Roach says he would get help sooner, and he advises others to do the same.

“The biggest mistake was not reaching out for help, thinking I can do everything, because you can’t,” he said. “I’m afraid of where I would be today if it wasn’t for the Vets Home Medical Day Care program.”

The Long Island State Veterans Home is a 350-bed skilled nursing facility located on the campus of Stony Brook University. Opened in 1991, the facility is operated through the Health Sciences of Stony Brook University and is one of the only nursing homes in the nation that is fully integrated into the health and educational mission of a major teaching and research university.