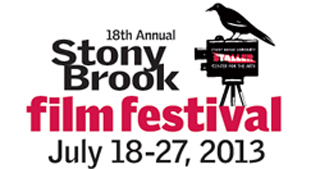 STONY BROOK, NY, June 3, 2013 — The 18th Annual Stony Brook Film Festival presents an exciting mix of new independent features, documentaries and shorts coming to Staller Center for the Arts for ten days from Thursday, July 18 to Saturday, July 27. The complete program of films will be announced at www.stonybrookfilmfestival.com on Monday, June 3rd.

Film passes good for all films are available for $80 at www.stonybrookfilmfestival.com or by calling the Staller Center Box Office at (631) 632-ARTS [2787]. Seating is guaranteed for Passholders up to 15 minutes prior to screening time, giving them priority entry. In addition, Festival reception tickets (Opening and Closing Night) are discounted for Passholders. Single tickets go on sale on Monday, July 8. $9 general admission/$7 seniors and students.

Alan Inkles, founder and director of the Stony Brook Film Festival, has carefully curated the selections for the popular summer festival, giving audiences screening experiences they won’t find anywhere else. “In the most competitive season in our eighteen year festival, I felt we left a second festival on the cutting room floor. The entries this year, both in the shorts and features categories, were challenging, entertaining and full of discoveries,” said Mr. Inkles.

Click here for an in-depth interview with Christine Vachon.


Ms. Vachon has produced more than 70 films in less than 20 years — and seven features in the last year alone, including At Any Price (Zac Efron, Dennis Quaid), Kill Your Darlings (Daniel Radcliffe), and Deep Powder, with director Mo Ogrodnik. She has been associated as a producer of films screened at Stony Brook over the years: Wildflowers was the opening night film of the 2000 Stony Brook Film Festival; Hedwig and the Angry Inch screened in 2001; The Grey Zone made an East Coast Premiere in 2002. Cairo Time and I’m Not There were  among the films screened at Staller Center’s film series during the academic year. Ms. Vachon produced Haynes’ first film, Poison, which won the Sundance Grand Jury Prize in 1991. She has worked on every Todd Haynes’ feature film to date.


Jena Malone and Chloe Sevigny in The Wait

Director M Blash’s The Wait starring Jena Malone and Chloe Sevigny will follow the screening of Deep Powder.  Screening at 9:30 pm on July 26, the East Coast Premiere promises audiences an unusual film with a complex aesthetic.  Director and cast have been invited to the screening.


Premium network EPIX presents a stunning American documentary, having its  Festival Premiere screening on Saturday, July 20 at 3:00 pm, followed by a Q & A panel discussion with the filmmakers, Kristina Borjesson and Tom Stalcup. TWA Flight 800 presents the saga of the catastrophic crash off the south shore of Long Island on July 17, 1996. At the time, it was called “the largest aviation investigation in U.S. and world history.” But it was also the most controversial. Now, a team of insiders from that investigation comes forward in this feature documentary to uncover what really happened to TWA Flight 800. It is also the story of one extraordinary scientist, Tom Stalcup, who spent years fighting for access to documents and evidence. Thirteen years into his quest, several retired members of the official crash investigation joined him.  In TWA Flight 800, these former government insiders blow the whistle on their own investigation and spend two years helping the scientist uncover the truth. What follows is a story of intense personal journeys and a grand-scale exposé with breathtaking implications.

The producer/director of TWA Flight 800 is print and broadcast journalist Kristina Borjesson, who edited and contributed to the book, Into the Buzzsaw: Leading Journalists Expose the Myth of a Free Press, for which she won the National Press Club’s Arthur Rowse Award.  Jeff Segansky, entertainment industry veteran and former president of CBS Broadcasting is executive producer. TWA Flight 800 is an EPIX Original Documentary with a premiere date on EPIX and EpixHD.com on July 17, 2013.


Outstanding directors will be on hand to represent their films on Opening and Closing Nights, fielding questions after screenings.

Opening Night features the East Coast premiere of Zaytoun, directed by Eran Riklis (Lemon Tree), who will be attending on Thursday, July 18 at 8:00 pm. Zaytoun stars Stephen Dorff (Somewhere) playing an Israeli soldier who is shot down over Beirut during the 1982 Lebanese War. He is taken prisoner by inhabitants of a Palestinian refugee camp, and among his captors is a ten-year-old boy, Fahed (Abdallah El Akal). The film is a moving portrait of the tentative bond forged between the Israeli pilot and the refugee boy.

Closing night features the East Coast Premiere of the Norwegian and German dramatic thriller, Two Lives, which takes place in Norway in 1990. Director Georg Maas will be on hand at Stony Brook at the screening on Saturday, July 27 at 8:30 pm. Two Lives is a compelling meditation on identity, morality and family. Katrine (Juliane Köhler) is the ‘war child’ of a Norwegian mother and a soldier from Germany’s occupying army. An adult now, she enjoys family life with her mother, her husband, daughter and granddaughter. Everything changes for Katrine when a web of concealments is revealed. The fine cast includes Norwegian film legend Liv Ullmann as Katrine’s mother.

Stony Brook will present the World Premiere of the feature, A New York Heartbeat, a riveting story about gangsters in 1959 Brooklyn, starring Escher Holloway, Rachel Brosnahan (Beautiful Creatures) and Eric Roberts. Director Tjardus Greidanus and cast are expected to attend.

The Blitz will be making its U.S. premiere on Friday, July 19 at 7 pm. The dramatic film is set just days before the Germans bombed the Netherlands in May 1940.  Director Ate de Jong (Drop Dead Fred) will be attending with Dutch actress Roos van Erkel.  The Festival will also host the U.S. Premiere of the German drama, The Tower, directed by Christian Schwochow.

Among the international films making East Coast Premieres is the powerful documentary from Pakistan, These Birds Walk, the Serbian-Croatian My Beautiful Country, the Polish drama Manhunt, the Turkish feature Watchtower, the Israeli drama Inheritance, directed by acclaimed actress Hiam Abbass (Lemon Tree) in her directorial debut. She also stars in the film.