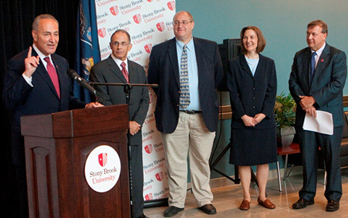 At the press conference from left, Senator Schumer, BNL Director Sam Aronson, Jim Misewich, Associate Laboratory Director for Basic Energy Sciences at BNL; Esther Takeuchi, a member of the National Inventors Hall of Fame who has amassed no less than 140 patents in energy storage and who serves under a joint appointment at Stony Brook University and Brookhaven National Laboratory and Stony Brook University President, Dr. Samuel L. Stanley Jr.

On Monday, June 25, 2012, Senator Chuck Schumer made a trip to the Stony Brook University Advanced Energy Research and Technology Center at the University’s Research and Development Park to show his support for the merits of a joint application submitted dubbed the “Center for Extended Lifetime Energy Storage Technologies” (CELESTE) by Brookhaven National Lab and Stony Brook University in response to a call for entries to a competition for Department of Energy funding for a new Energy Innovation Hub.

He met with Stony Brook President Samuel L. Stanley Jr., M.D., BNL Director Samuel Aronson and scientists from SBU and BNL who collaborated on the proposal, then addressed the press and a group of interested parties from around the Stony Brook campus.

Below is the press release issued by Senator Schumer’s office related to the visit.

Schumer: Project Would Create Hundreds of Good Paying Jobs on Long Island in the Short Term and Has the Potential for Many More

Biggest Obstacle to Growth of Electric Vehicle Market is Reliability of Batteries; BNL/SBU Battery Hub Would Develop More Efficient Batteries That Could Be Manufactured in Upstate New York

Schumer: Long Island Has the Technical Expertise, Upstate Has the Manufacturing Capacity and New York Would Get the Jobs

Charles E. Schumer, joined by Dr. Samuel Stanley, President of Stony Brook University, Sam Aronson, Director of Brookhaven National Lab, and other key stakeholders, called on the United States Department of Energy to approve a $120 million funding package from the United States Department of Energy for a joint Brookhaven National Laboratory-Stony Brook University electric battery hub that would create an immediate 100 high-paying jobs and over time, grow to a total of 270 jobs on Long Island and hundreds across the state. The project has the potential to create new manufacturing jobs in upstate New York if the research hub is able to make a major scientific breakthrough to extend the life of commercial battery technology. In addition to technologies to improve energy storage on our critical infrastructure, the project could revolutionize the electric vehicle market by creating refined batteries for electric cars that are more efficient than any battery currently on the market. Schumer made the case that the American electric vehicle market has been slow to take off because of the power and efficiency limitations of exiting batteries.

“Long Island has the expertise, research facilities, and the tools to revolutionize the electric vehicle and commercial battery market, and now we need to provide the resources to turn this expertise into a reality,” said Schumer. “The funding package we are working on securing will not only create hundreds of high-paying jobs on Long Island, but it could also create new manufacturing jobs in upstate New York if we make a major breakthrough.”

Schumer pointed to Long Island and New York’s established track record of using Brookhaven National Lab’s scientific prowess to make battery breakthroughs as proof-positive that the Brookhaven-Stony Brook application should be a clear favorite of the Department of Energy. Research conducted by GE scientists and engineers using the National Synchroton Light Source (NSLS) at Brookhaven National Laboratory employed x-ray experiments on the structure and chemical properties of batteries and has allowed scientists to better identify and fine tune battery design, maximizing performance and improving reliability. As a result, GE built a new manufacturing operation in Schenectady, NY to produce the new “Durathon” battery, which will eventually lead to the creation of 300 new jobs. Schumer noted that this Hub’s proposed scope of work holds the potential to fundamentally change how we power electric cars.  GE will continue its battery research work at the new National Sychrotron Light Source II. In addition to GE, major U.S. firms like General Motors and IBM have also signed on as part of the team to establish the battery hub.

Stony Brook University’s Advanced Energy Technology Center (AERTC) will be the dedicated home for the new hub, dubbed the Center for Extended Lifetime Energy Storage Technologies (CELESTE). Brookhaven National Lab’s facilities, including the Center for Functional Nanomaterials, National Synchrotron Light Source, and NSLS-II when complete will serve as the major instruments to provide state-of-the-art materials sciences capabilities, allowing researchers to thoroughly understand the nanoscale structure, composition and functioning of electrochemical materials and to analyze how batteries wear down, while operating.

“The goal of this hub is to focus on the complete spectrum of electrochemical energy storage, from basic research to commercialization,” said Brookhaven Lab Director Sam Aronson. “Together with Stony Brook University, NYSERDA, and NYSTAR, along with our other partners in academia, industry, and New York state entities including not-for-profits, we believe we have the people, the scientific tools, and the expertise needed to impact all aspects of the energy storage challenge. We deeply thank Senator Schumer for his support of our proposal.”

“We feel strongly that SBU-BNL proposal and the scientists and staff who will move it forward are the right match for the Department of Energy’s call for an Energy Innovation Hub,” said President Stanley. “The existing infrastructure of Stony Brook’s Advanced Energy Center and the work we are forging alongside Brookhaven National Lab and our partners with the Smart Grid demonstration project and the Smarter Grid 3 project will enhance the opportunity for progress in advanced batteries and energy storage. We are grateful to Senator Schumer for calling attention to this important proposal, and the impact it will have in our region, and on the State of New York should we receive the funding to pursue these important considerations for advancing the sustainability of clean energy in this country.”

In a personal call to Department of Energy Secretary Steven Chu, Schumer made the case on the merits of the BNL-Stony Brook application and urged the Secretary to fund the project. Schumer noted the inclusion of the new Light Source at the Lab – NSLS II –a one-of-a-kind research machine that is unique to the BNL-Stony Brook application. Schumer pointed to the Durathon battery as an example of the exciting work that will be done there. He also pointed to the profound implications the project could have on the commercial battery market, battery operated automobiles, and our overall electrical grid. By improving storage technologies used on the grid, it will make it possible for utilities to much more easily integrate renewable resources like the sun and wind into the system.

The partnership between Brookhaven and Stony Brook will also include Columbia, Harvard, Princeton, CUNY, RPI, Cornell, General Electric, IBM, NYSERDA, NYSTAR, and the New York Battery and Energy Storage Technology (NYBEST), a consortium of over 100 entities in the battery sector, to focus on electrochemical energy storage from research to commercialization, along with many other academic and industrial institutions.