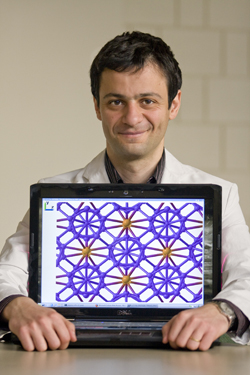 Research team sheds light on one of the most complicated element in the Periodic Table; they discover a new phase that shows charge transfer from the B2 to the B12 clusters, which thus play the same roles as “cations” and “anions” in normal ionic salts


STONY BROOK, N.Y., January 28, 2009 — Scientists have found the first case of an ionic crystal consisting of just one chemical element – boron. This is the densest and hardest known phase of this element. The new phase turned out to be a key to understanding the phase diagram of boron – the only element for which the phase diagram was unknown since its discovery 200 years ago. This work is published in the January 28, 2009 issue of Nature. Results on the hardness of the new phase are published in a separate paper in the Journal of Superhard Materials.

The team of authors is made of sub-teams led by Artem R. Oganov (theoretical crystallographer from Stony Brook University), Jiuhua Chen (materials scientist from Florida International University), Carlo Gatti (theoretical chemist from the University of Milano, Italy), and Vladimir Solozhenko (physical chemist from Centre national de la recherche scientifique/CNRS, France). Such a large effort was necessary to crack down on what is likely the most complicated element in the Periodic Table.

Boron has long been known as a graveyard of great scientific reputations. Its bizarre tale started in 1808, when two great teams – J.-L. Gay-Lussac and L.-J. Thénard in Paris and Sir Humphrey Davy in London – independently announced the discovery of a new element, boron. Later it was proven that in both cases the “element” was a compound containing not more than 60-70% boron. The most definitive proof of this was made by another great chemist, H. Moissan, but his material was later also shown to be a compound with less than 90% boron. In 1858, F. Wöhler wrote in his classical book that boron has two polymorphs – a graphite-like one, and a diamond-like one. Now we know that both forms are actually compounds, AlB12 and B48C2Al, respectively. The first time 99% boron was synthesized was in 1909, but this was not the end of story. Even 1% of impurities, or even less, can change the structure and properties of boron in an amazingly strong way and compounds such as PuB100 are known.

“Such sensitivity to impurities is unprecedented among the elements and makes studies of this element nothing short of a nightmare,” says Artem R. Oganov, Associate Professor at the Department of Geosciences and New York Center for Computational Science at Stony Brook.

There have been 16 polymorphic modifications of boron reported to date, but most of these are likely to be impurity-stabilized forms. This is the only element for which the ground state is not experimentally known even at ambient conditions.

Among the many abnormalities found for boron is also the recent suggestion that it violated the third law of thermodynamics (which states that stable phases at zero Kelvin must be perfectly ordered) at atmospheric pressure. High-pressure behavior remained even more mysterious.
The stage for present research was set in 2004, when Chen and Solozhenko independently synthesized a new form of boron at high temperatures and pressures above 100,000 atmospheres. The structure could not be solved from experimental data alone, and required a new theoretical method that was developed by Dr. Oganov at the time.

“The method is a purely theoretical, requires no experimental information, and is based on ideas of natural evolution applied to the search for the most stable crystal structure,” said Dr. Oganov. “The computer generates dozens of trial crystal structures, whose energies are evaluated using quantum-mechanical calculations, and the most favorable of the sampled structures mate and mutate to produce child structures until the most stable structure is found.”

Using this method Dr. Oganov was able to find the structure and determined that it is a true ground state of boron and there is significant charge transfer between boron atoms within the structure.

Dr. Gatti’s sophisticated analysis confirmed bond ionicity, and Dr. Solozhenko’s further experiments revealed that the new phase is superhard with a Vickers hardness of about 50 GPa. Quantum-mechanical calculations suggest a very large stability field for this new phase, extending up to 900,000 atmospheres in pressure.

How can an element be ionic? Classical chemistry textbooks indicate that charge transfer occurs when atoms have different electronegativities and this automatically disqualifies pure elements as possible ionic phases. Boron finds a surprising solution to this problem – its new structure contains two very different types of nanoclusters, B12 icosahedra (blue in the figure above) and B2 dumbbells (orange in the figure above). The electronic structures of these two clusters are very different – in fact, the dependence of electronic properties on the size of the cluster is well known and is the main idea of nanotechnology. Electronegativities of the B12 icosahedra and B2 pairs are different, and this causes charge redistribution and the emergence of partial ionicity in this elemental structure.

“What’s also striking,” said Dr. Oganov, is that the centers of mass of clusters in this new structure occupy the same positions as atoms in the structure of NaCl, an archetypal ionic compound.

As a result of these findings, Oganov and colleagues anticipate other ionic forms of the elements, and propose several stable or metastable possibilities. Furthermore, elemental liquids are likely to have some degree of instantaneous charge transfer between the atoms. Apart from being a curiosity, ionic elements have interesting and potentially important properties. The properties most affected by ionicity include the dielectric constants, vibrational spectra, and electronic band gap. Among these anomalous properties, the predicted infrared absorption spectrum (which is entirely due to charge redistribution between the atoms) has already been fully confirmed in experiments of Chen’s team. Inducing transitions from non-ionic to ionic structure will result in such changes in the properties that otherwise would be hard to achieve.

The Department of Geosciences and New York Center for Computational Science are major research divisions of Stony Brook University. For more information go to www.geosciences.stonybrook.edu and www.newyorkccs.org; or contact Artem R. Oganov at 631.632.1429 or 631.675.1524; or by email at artem.oganov@sunysb.edu.