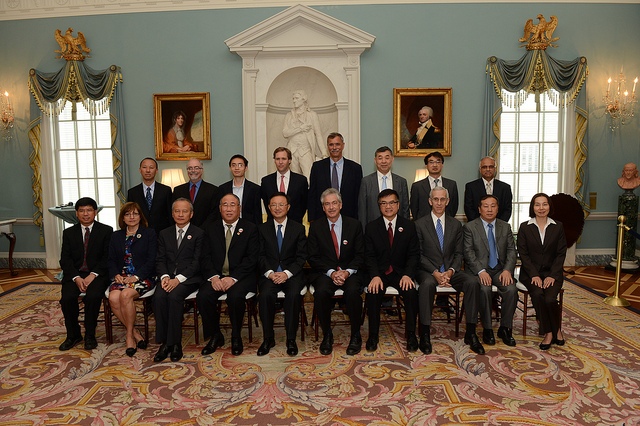 
WASHINGTON, D.C. AND STONY BROOK, NY, July 11, 2013 – Stony Brook University and Tongji University have established a cooperative relationship for sharing technologies to promote the global use of biogas at the EcoPartnership Signing Ceremony at the U.S. Department of State in Washington, D.C., on Thursday, July 11. The ceremony was part of the two-day Fifth U.S.-China Strategic and Economic Dialog.

The EcoPartnership, officially signed before U.S. Deputy Secretary of State William Burns, involves landfill biogas control and reutilization, which will ultimately promote the use of biogas worldwide. Stony Brook will leverage the Town of Brookhaven landfill site and Tongji will leverage the Laogang landfill in Shanghai for technology demonstration. Industrial partners include All Power Labs, a small-scale gasifies manufacturer, and Oberon Fuels, which has developed a biogas to diesel substitute process. There is discussion with both companies about partnering on R&D to use the new Low-Carbon Energy Management labs at the Advanced Energy Research and Technology Center (AERTC).

EcoPartnerships enable sub-national stakeholders — including academic institutions, companies and local government entities — to promote innovative models for collaboration between the United States and China on major energy and environmental challenges. The signing ceremony showcased the six new teams that have joined the program. Stony Brook’s EcoPartner affiliation is through the National Science Foundation Center for Bioenergy Research Development (NSF-CBERD) located within AERTC. The SBU-NSF-CBERD has entered into the EcoPartnership with the School of Environmental Science and Engineering at Tongji University in China.


“Professor Mahajan’s work with CBERD in this area is game-changing as the world contemplates and creates alternative energy resources,” said Stony Brook University President Samuel L. Stanley Jr., MD. “Working with our partners at Tongji University in China will advance this initiative farther and faster than we could have ever imagined. This is a remarkable partnership opportunity, and we applaud Secretary of State John Kerry and the Department of State for seeing it come to fruition.”

The overall goal of the EcoPartnership is to establish pathways to curb global methane emissions, reduce greenhouse gas emissions and provide clean biofuels for transportation and power production.

Each project team is represented by a task force. In addition to Professor Mahajan, who has been designated team leader and is also site director of the NSF-funded CBERD, the Stony Brook task force includes Benjamin Hsiao, Vice President for Research, and David Tonjes, Assistant Professor in the Department of Technology and Society. The team leader from China is Professor Chai Xiaoli, and his task force includes professors Cao Jianglin and Zhao Wentao.

The EcoPartnership was initiated in 2009 with the purpose of developing collaborative projects that further energy security, promote economic sustainability and advance environmental sustainability in the United States and China, and prioritize finding solutions to the energy and environmental challenges that both countries face. This cooperation is under the EcoPartnerships Framework pursuant to the Framework for the Ten Year Cooperation on Energy and Environment between the U.S. and Chinese governments signed on June 18, 2008. The partnership has the potential to provide the scale, standards and technology transfer necessary to develop promising clean-energy technologies, address global climate change issues and maximize economic ripple effects through environmental sustainability and energy security.