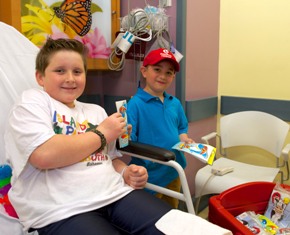 Sean Flynn, 10, left, of Rocky Point, is all smiles after receiving a coloring book from Jake June, age six, of Bayport. After he was treated at the Pediatric Emergency Department in December, Jake raised $275 from sales of homemade cookies and iced tea to purchase 1,800 coloring books to benefit other children who are treated at the Pediatric Emergency Department at Stony Brook Long Island Children’s Hospital.


STONY BROOK, N.Y., April 2, 2013 – Six-year-old Jake June knew what he wanted to do after he was well cared for by the doctors and staff in the Pediatric Emergency Department at Stony Brook Long Island Children’s Hospital last December. “Because they took care of me, it’s time for me to pay them back,” said Jake, the son of Scott and Karen June of Bayport, NY.

And that’s exactly what he did. After his treatment and recovery from the stomach flu, Jake, a first-grade student at Academy Street Elementary School, decided to hold a fundraiser to benefit Stony Brook Children’s. He and his family brewed iced tea and baked cookies, which they sold at his father’s business, All Pro Sports Academy in Bellport, NY, on March 2. Asking for donations only, Jake raised $275, which his parents used to purchase 1,800 coloring books to give to other children who are treated in the Pediatric Emergency Department.

“We’re just so proud of him,” said his father, Scott, during Jake’s visit to Stony Brook Children’s on April 1 to deliver the coloring books. “It came out of nowhere on his own. He just wanted to repay the favor that was done for him.”


Walter Hinds of Lake Ronkonkoma, NY, the father of three-year-old patient Tyler Hinds, who received a coloring book from Jake, was certainly impressed when he learned what Jake had done. “I think it’s fantastic for a six-year-old to do something like this,” he said. “I think his future is bright.”

Ten-year-old Sean Flynn, another patient in the Pediatric Emergency Department, was also impressed and inspired. “I think it’s very cool,” said the son of Bernard and Kathleen Flynn of Rocky Point, who is a fifth grader at Joseph A. Edgar Elementary School. “I think it’s remarkable a six-year-old boy has a dream to help people. It’s very generous to raise money and then use it all to help other people.”
“I don’t know where he got the idea from,” said Jake’s mother, Karen, beaming with pride. “He just knows to give back…. He has the best heart.”