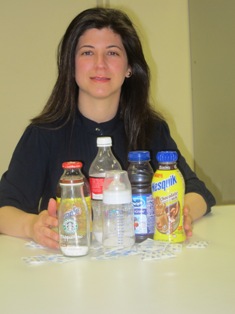 STONY BROOK, N.Y., March 19, 2012 – Sugary drinks are the single biggest contributor to the obesity epidemic in the United States, and according to the Centers for Disease Control, two-thirds of adults and one-third of the children in the U.S. are overweight or obese. Registered dietician Leah Holbrook, Coordinator of the Long Island Center for Pediatric Obesity Prevention in the Department of Family Medicine at Stony Brook School of Medicine, says that these sobering statistics and the fact that beverages account for nearly half of the added sugars in our diet are a wakeup call for Americans to reduce their sugary drink intake.

In recognition of National Nutrition Month, the Long Island Center for Pediatric Obesity Prevention is focusing this month’s nutritional education on raising awareness about drinks that are high in sugar. An expert on obesity prevention, Holbrook says Americans are consuming too many sugary beverages.

Holbrook explains the scope of the problem in relation to the American diet, why such drinks are dangerous to our health, particularly in children, and what parents should do to help their children develop better dietary drinking habits:

1)      Americans are consuming too much sugar in our beverages:

“Sugary drinks, such as soda, juices, and chocolate milk, are the single biggest contributor to the nation’s obesity epidemic. Beverages account for nearly half of the sugars in our diets, and a typical American drinks 40 pounds of sugar a year. Children and teenagers consume too much sugar. In New York State, approximately 42 percent of children between the ages of 12 and 17 have at least one soda or sugary beverage a day.”

“It might surprise the average consumer to know that a typical 20-ounce bottle of soda contains approximately 65 grams of sugar. This translates to the equivalent of 16 packets of sugar for every 20 ounce bottle consumed. Additionally, the serving size for a midsized sugar-sweetened beverage has increased over time. It has grown from 6 ounces in the 1950s to 13 ounces in the 1970s, to 19 ounces today.

“Many common beverages we drink contain much more sugar than we expect. For instance, most juices sold contain only 10 percent actual juice with a lot of added sugar, including high fructose sugar.”

“A child who drinks just one 8-ounce sugary drink ever day increases his/her chances of becoming obese by 60 percent. Sugary drinks do not create the same sense of fullness that solid food does, so children (and adults) are just as likely to consume their regular calories rather than adjust them to compensate for the liquid calories. An additional problem with sugary drinks is that the sugar makes people feel hungrier, and therefore they may actually eat more.”

4)      Parents can instill better drinking and dietary habits in their children: