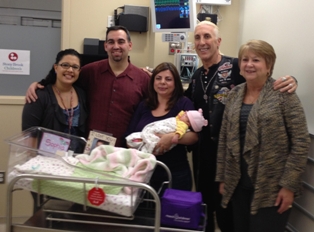 Dee Snider, second from right, former Twisted Sister rock band singer and current cast member on Celebrity Apprentice, poses with Jane Massey, former chief operating officer at the March of Dimes, during a visit to the Neonatal Intensive Care Unit at Stony Brook Long Island Children’s Hospital last November. At left is Lindsey Soto-Villanueva, the March of Dimes NICU Family Support Specialist at Stony Brook, with parents John and Pia Adamo holding their newborn daughter Sophia. Snider presented a check for $325,000 to Massey at the hospital, representing proceeds he won for the March of Dimes through the Celebrity Apprentice program.

Snider served as project manager for his team on Sunday’s episode and led his team to victory in the challenge. The team earned $325,000, which was donated to the March of Dimes, as Snider’s selected charity for the program. During his visit to Stony Brook Children’s last fall, he was filmed donating the check to the March of Dimes. The full episode is available for viewing here.


Now in its fifth season, Celebrity Apprentice this year features celebrity contestants competing, not for a job with the Trump Organization, but for the greater goal of raising money and awareness for their charity of choice. The last person standing will be “hired” as the Celebrity Apprentice and have the honor of delivering a $250,000 bonus check to their designated charity. Snider is among 10 contestants still in the running on this year’s show.

A resident of Setauket, NY, Snider chose the March of Dimes as a cause that’s near and dear to his heart. Two of his four children were born prematurely but are healthy now. He is a long-time March of Dimes volunteer who has served as national spokesperson for the March of Dimes Bikers for Babies since 2008.

“It’s people like Dee, who know too well the fear and uncertainty of having a baby in the newborn intensive care unit (NICU), who can do the most to help other families have full-term, healthy babies,” said Dr. Jennifer L. Howse, president of the March of Dimes. “We couldn’t be prouder of Dee!”

Snider has been riding in Bikers for Babies for more than a decade. This year, events will take place throughout the country, with most occurring September 15 or 16, 2012. Each ride is about 70 miles long, with every mile counting to help fight premature birth and give every baby a healthy start in life.

In a video clip posted on the Celebrity Apprentice website, Dee describes Bikers for Babies as a “showing of solidarity” for how the “motorcycle community is unified in helping this cause.” He tells how he and his wife want to give back to the organization whose research enabled one of his daughters to survive and thrive despite her prematurity.

The March of Dimes is the leading non-profit organization for pregnancy and baby health. With chapters nationwide and its premier event, March for Babies®, the March of Dimes works to improve the health of babies by preventing birth defects, premature birth and infant mortality. The Suffolk County March for Babies will be held on Sunday, May 6, on the Stony Brook University campus. For the latest resources and information, visit marchofdimes.com.