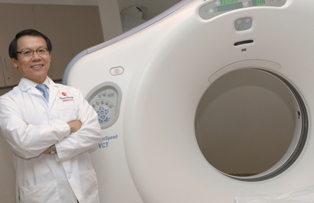 Published in the JACC, Dr. Michael Poon says findings save significant costs, time, and unnecessary admissions by ruling out coronary blockages in the Emergency Department

STONY BROOK, N.Y., July 31, 2013 – A study of two sets of 894 matched Emergency Department (ED) patients presenting with chest pain revealed that the use of coronary computed tomographic angiography (CCTA) led to fewer hospital admissions and shorter ED stays. According to lead researcher Michael Poon, MD, of Stony Brook University School of Medicine, the findings provide evidence that CCTA offers an alternative means of improving the triage of chest pain patients. The paper, “Associations Between Routine Coronary Computed Tomographic Angiography and Reduced Unnecessary Hospital Admissions, Length of Stay, Recidivism Rates, and Invasive Coronary Angiography in the Emergency Department Triage of Chest Pain,” is published online in the August 6 issue of the Journal of the American College of Cardiology.

Chest pain is the most common chief complaint in ED patients 65 years and older in the United States. According to the National Health Statistics Report, the symptom leads to more than six million ED visits and more than $10 billion in hospital costs per year. The use of CCTA may help emergency room physicians evaluate patients with chest pain. CCTA is a noninvasive heart imaging test that helps determine if fatty or calcium deposits/plaques have narrowed a patient’s coronary arteries. CCTA is a special type of x-ray examination that combines x-ray equipment with sophisticated computer hardware and software to produce high quality and diagnostic images or pictures of the heart.

Dr. Poon and colleagues completed an analysis of data on thousands of Stony Brook patients with chest pain who received either standard evaluation for acute coronary symptoms, which included ED cardiac monitoring with electrocardiograms and blood tests, or CCTA from January 1, 2008, to April 30, 2010. When comparing two matched groups of 894 patients, they found that patients who with standard evaluation had a 5.5 times greater risk for hospital admission and an ED length of stay 1.6 times longer than those who had undergone CCTA.

“We found that CCTA is favorable to triaging patients with chest pain and greatly reduces healthcare resource utilization, thereby saving significant costs, time, and unnecessary hospital admissions by ruling out a coronary blockage or imminent danger of a cardiac event,” said Dr. Poon, a Professor of Radiology, Medicine, and Emergency Medicine, Director of Advanced Cardiovascular Imaging, and Director of the Dalio Center of Cardiovascular Wellness and Preventive Research at Stony Brook Medicine. Dr. Poon, who implemented routine CCTA at Stony Brook in 2009 in the ED, added that study it is the largest single-center analysis comparing the routine use of CCTA to a standard evaluation approach.

The study results also indicated that patients with standard evaluation were seven times more likely to have invasive coronary angiography without revascularization than patients evaluated with CCTA. Additionally, the likelihood of returning to the ED within 30 days for recurrent chest pain in patients with standard evaluation was five times greater, yet there were no differences in the rates of death and acute myocardial infarction within 30 days between the two groups.

Dr. Poon said that a major impetus to the study is the lack of widespread CCTA use in emergency settings nationwide to evaluate cardiovascular disease and acute coronary symptoms. He explained that while a variety of issues currently limit the use of CCTA for evaluation of ED patients with chest pain, the most often criticized aspect is the potential for a high radiation dose during the procedure.

“Previous studies have shown that CCTA has emerged as a useful tool for ruling out the presence of significant obstructive coronary artery disease in patients with stable symptoms,” said Dr. Pooon. “We have developed a low-dose radiation CCTA method that can be safely and effectively used in the ED to evaluate these patients. With the right technology and experts, CCTA use increases emergency physicians’ ability to accurately and efficiently triage patients with chest pain.”

The study involved CCTA of patients in a setting where CCTA was available 12 hours a day, seven days per week. Patients undergoing CT were scanned on a 64-slice CT with a median radiation dose of 5.88 mSv compared to 12 mSv of a routine nuclear stress test. Obstructive artery stenosis was defined as 50 percent or greater lumen narrowing.