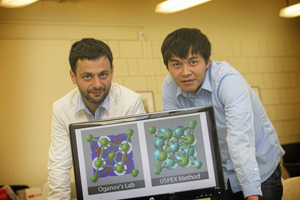 STONY BROOK, NY, April 22, 2013 – A team of researchers led by Artem R. Oganov, a professor of theoretical crystallography in the Department of Geosciences, has made a startling prediction that challenges existing chemical models and current understanding of planetary interiors — magnesium oxide, a major material in the formation of planets, can exist in several different compositions. The team’s findings, “Novel stable compounds in the Mg-O system under high pressure,” are published in the online edition of Physical Chemistry Chemical Physics. The existence of these compounds — which are radically different from traditionally known or expected materials — could have important implications.

“For decades it was believed that MgO is the only thermodynamically stable magnesium oxide, and it was widely believed to be one of the main materials of the interiors of the Earth and other planets,” said Qiang Zhu, the lead author of this paper and a postdoctoral student in the Oganov laboratory.

“We have predicted that two new compounds, MgO2 and Mg3O2, become stable at pressures above one and five million atmospheres, respectively. This not only overturns standard chemical intuition but also implies that planets may be made of totally unexpected materials. We have predicted conditions (pressure, temperature, oxygen fugacity) necessary for stability of these new materials, and some planets, though probably not the Earth, may offer such conditions,” added Oganov.

In addition to their general chemical interest, MgO2 and Mg3O2 might be important planet-forming minerals in deep interiors of some planets. Planets with these compounds would most likely be the size of Earth or larger.

The team explained how its paper predicted the structures in detail by analyzing the electronic structure and chemical bonding for these compounds. For example, Mg3O2 is forbidden within “textbook chemistry,” where the Mg ions can only have charges “+2,” O ions are “-2, and the only allowed compound is MgO. In the “oxygen-deficient” semiconductor Mg3O2, there are strong electronic concentrations in the “empty space” of the structure that play the role of negatively charged ions and stabilize this material. Curiously, magnesium becomes a d-element (i.e. a transition metal) under pressure, and this almost alchemical transformation is responsible for the existence of the “forbidden” compound Mg3O2.

The findings were made using unique methods of structure prediction, developed in the Oganov laboratory. “These methods have led to the discovery of many new phenomena and are used by a number of companies for systematically discovering novel materials on the computer — a much cheaper route, compared to traditional experimental methods,” said Zhu.

“It is known that MgO makes up about 10 percent of the volume of our planet, and on other planets this fraction can be larger. The road is now open for a systematic discovery of new unexpected planet-forming materials,” concluded Oganov.

This work is funded by the National Science Foundation and DARPA.

Artem R. Oganov has been a professor at Stony Brook University since 2008. He has published 112 papers and has one patent. He was recently one of three Stony Brook professors to receive an $800,000 Materials Genome Initiative (MGI) award from the National Science Foundation (NSF). The full story on this award can be found by clicking here.

Qiang Zhu earned his BS in Materials Sciences Engineering, Beihang University. He joined the Oganov lab in 2009 and has defended his PhD in Crystallography in February 2013. He has co-published more than 12 papers with Professor Oganov.