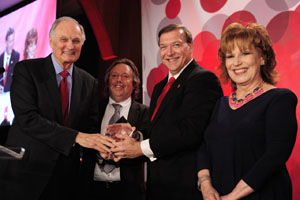 SBU President Stanley says, “Without Alan Alda, there would be no Center for Communicating Science”

STONY BROOK, NY, April 24, 2013 – Stony Brook University’s Center for Communicating Science – the first of its kind in the United States — was renamed today in honor of Alan Alda, the renowned actor, director,  and writer who has made communicating science to the public an art form.

The naming of the “Alan Alda Center for Communicating Science”  was announced by University President Samuel L. Stanley Jr., M.D., at the Stony Brook Foundation’s annual fundraising Gala, “The Stars of Stony Brook.” Mr. Alda was the guest of honor at the event at Chelsea Piers in Manhattan. Mr. Alda is a founding board member of the Center that now bears his name and a Visiting Professor in the Stony Brook University School of Journalism, which houses the Center.  Its goal is to enhance public understanding of science by helping scientists and health professionals learn to communicate more effectively with the public, including public officials, students, the media, and colleagues in other disciplines.

“Without Alan Alda, there would be no Center for Communicating Science,” said President Stanley. “He has been a tireless and full partner in the Center since its inception. During the past four years, he has traveled thousands of miles championing its activities at other universities and labs, at national conferences, and in one-on-one sessions with academic, government and foundation leaders. He has helped train our faculty and develop our curriculum, and he personally teaches some workshops.”

Howard Schneider, Dean of Stony Brook’s School of Journalism, echoed those sentiments. “Alan did not casually lend his celebrity to this effort,” Dean Schneider said. “Alan inspired its birth. He opened doors that would have been impossible to open otherwise. He’s the Center’s evangelist and its muse. When the rest of us run out of gas, he’s been an inexhaustible source of encouragement and creative ideas.”

Mr. Alda commented, “For years, I’ve been working to bring communication and science together in a more fundamental way, and now it’s happening. The blossoming of the Center for Communicating Science at Stony Brook has been a dream come true for me.”

In his “day job” as an actor, Alan Alda became famous playing surgeon Hawkeye Pierce in the acclaimed TV series M*A*S*H from 1972 to 1983. He has won seven Emmy Awards and six Golden Globe Awards, and created memorable characters in scores of movies, several of which he also wrote and directed.  Among other television roles, he played a presidential candidate on The West Wing and Alec Baldwin’s father on 30 Rock.  Mr. Alda was the first person to win an Emmy in three categories: for acting, writing and directing. In 2005, he had the distinction of publishing a best-selling book, Never Have Your Dog Stuffed—And Other Things I Have Learned,’  and being nominated for an Oscar, an Emmy, and a Tony, all in a single year.

Yet exceptional as his artistic achievements are, they are rivaled by his contributions to improving communication of science to the public.  As host of PBS’ Scientific American Frontiers from 1993 to 2005, he talked with hundreds of scientists around the world and saw that they communicate much better when they carry on real, personal conversations about their work, rather than lecturing or falling back on technical language.  He brought that insight to Stony Brook, inspiring the University to create the Center for Communicating Science in 2009. With the Center, Mr. Alda has been pioneering the use of improvisational theater exercises to help scientists share their work and their passion for science more spontaneously and directly with the public.

“Alan Alda has shown us that scientists communicate best when they connect as people, sharing their passion in real, two-way conversation with others,” said Elizabeth Bass, director of the Alda Center.  “Alan’s insight is at the heart of our approach, which uses improvisation, story-telling and clear, vivid language to help scientists share the beauty and meaning of their work.”

During the Gala program, two special guests were brought out to surprise Alan, and surprise him they did. Two Chilean physicians, Nelson Zepeda Perez and Celia Moreno Chamorro, helped save Alan’s life while he was filming in a remote location there ten years ago, an anecdote he often shares to demonstrate a turning point in his life that convinced him that communicating science was a mission.

Among his many contributions to science communication, Mr. Alda initiated the Flame Challenge, an international contest run by the Center.  It began last year when he wrote a guest editorial in the journal Science, recalling how, as an 11-year-old, he had been fascinated by the flame on the end of a candle. When he asked his teacher what a flame was, she replied only: “Oxidation.”  That answer meant nothing to him. In his editorial, Alda challenged scientists to do a better job of explaining a flame to an 11-year-old. More than 800 scientists responded, and thousands of 11-year-olds chose the winner: Ben Ames from Kansas City, currently studying quantum optics as a graduate student at the University of Innsbruck, Austria. (Editor’s Note 1: Ames attended the Stars of Stony Brook Gala. Editor’s Note 2: This year’s Flame Challenge question – “What is time? — was suggested by 11-year-olds themselves.  Nearly 20,000 11-year-olds have signed up to participate as judges. The winner will be announced in June at the World Science Festival in New York.)

“While Alan Alda is widely recognized for his many achievements on stage and screen, his innovative approach to scientific communication takes the spotlight at tonight’s Stars of Stony Brook Gala,” said Richard L. Gelfond (SBU ’76), Gala Chair, Chairman of the Stony Brook Foundation Board of Trustees and CEO of IMAX Corporation. “We honor Alan, a founding board member of the Center for Communicating Science and a Visiting Professor in our School of Journalism, for his commitment to helping scientists and health professionals learn to communicate more effectively with the public and have named the Alan Alda Center for Communicating Science in his honor.”


The Alan Alda Center for Communicating Science at Stony Brook University was established in 2009 within Stony Brook’s School of Journalism, in collaboration with Brookhaven National Laboratory and Cold Spring Harbor Laboratory, with the goal of training the next generation of scientists to communicate more effectively with the public.

“Our aspiration is to become the first university in the nation to offer training in communications to all of our science and health graduate students,” Bass said. “We think communication should be an intrinsic part of scientists’ education, not something extra tacked on at the end.”

In addition to its work at Stony Brook, the Alda Center has conducted training workshops at universities and other science-oriented institutions around the country ranging from national labs to the National Cancer Institute, from the New York Academy of Sciences to the U.S. Department of Homeland Security. People from 60 other universities have been trained at workshops on their own campuses or at Stony Brook.

Ultimately, Schneider said, Stony Brook wants to share what is learned here with the rest of the country – to be the national center for training in communicating science, the clearinghouse for best practices and the nationally-recognized leader in research and assessment in this area.

“What we really want is to lead the effort to help improve understanding of science in this country so that we all can make better decisions,” he said. “I have no doubt that it will happen, due in large part to the work of Alan Alda.”