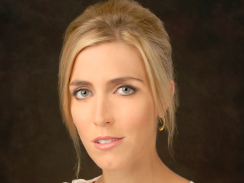 STONY BROOK, NY, September 17, 2013 – CBS Foreign Correspondent Clarissa Ward has been named the second speaker in the Marie Colvin Center Distinguished Lecture Series at the Stony Brook University School of Journalism. The lecture will be held on Monday, September 23, 2013 in the Student Activities Center Auditorium at 8 p.m.

Ward spent much of last year covering the Middle East, particularly the conflict in Syria, where she was the first American correspondent to broadcast live from inside rebel-held territory. Ward’s work in Syria was recognized with the Peabody Award, the DuPont Award and the David Bloom Award. She is nominated for 3 Emmy Awards this year, two of them for her first piece for 60 Minutes, titled “Aleppo.”

The Marie Colvin Distinguished Lecture series is a key program of the new Center for International Reporting at Stony Brook University, which was established last year in honor of Marie Colvin, the Long Island native who was tragically killed while covering the conflict in Syria in 2012.

“I looked up to Marie enormously,” said Ward. “She was a fantastic journalist and a force of nature. Fearless and passionate and committed, she gave depth and context to her stories and dignity to her subjects. Her legacy is an inspiration to all of us who were lucky enough to have known her and who are privileged to do this work.”

The aim of the Center is to nurture and grow the next generation of foreign correspondents, while raising awareness for the need for international news coverage. CNN’s Chief International Correspondent Christiane Amanpour gave the inaugural talk at Stony Brook University last February. Amanpour also donated $60,000 in support of the Center’s overseas reporting program, Journalism Without Walls, which has already sent student journalists to Russia, Cuba, China and Kenya.

Previously, Ward worked as the Beijing-based Asia Correspondent for ABC News. She was one of the first network correspondents to report directly from the hardest hit areas after the devastating earthquake and tsunami in Japan. She has also reported from Afghanistan, Russia and Georgia. In 2008, her reporting on the global food crisis received an Emmy Award for Business & Financial Reporting.

“Tenacious, dedicated foreign correspondents like Clarissa Ward, and Marie Colvin, are the very best kind of role models for our students,” said Professor Ilana Ozernoy, who is heading the effort to develop the Marie Colvin Center. “Through their hard work, courage, and commitment to getting ground truth, they inspire the next generation to engage in the world beyond our borders, both as news consumers and as journalists.”

Admission to the Marie Colvin Distinguished Lecture Series is free. Students should pick up tickets directly from the box office at the Students Activities Center on Campus. Members of the public and university community are welcome to reserve tickets with the School of Journalism by emailing journalism@stonybrook.edu.