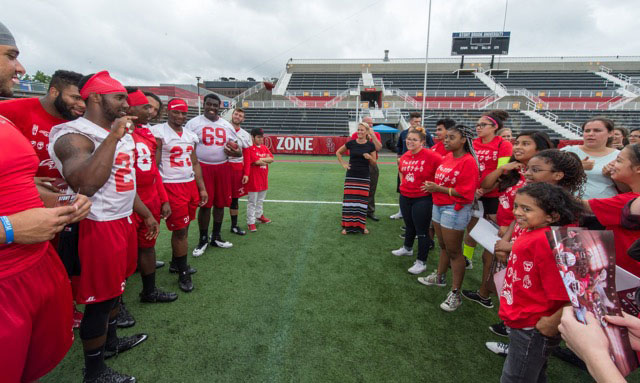 STONY BROOK, NY & WASHINGTON, D.C., August 29, 2012 – In a paper published this week in the journal “Polar Biology”, researchers from the Antarctic Site Inventory confirm significant declines in the breeding population of chinstrap penguins in the vastly warming Antarctic Peninsula, where it’s warming faster than, or as fast as, any other place on Earth. In the paper entitled “First direct, site-wide penguin survey at Deception Island, Antarctica, suggests significant declines in breeding chinstrap penguins”, these results and analyses stem from fieldwork conducted in December 2011 at Deception Island, one of the most frequently visited locations in Antarctica.

The Inventory has been collecting and analyzing Antarctic Peninsula-wide penguin population data since 1994, and these new findings have important implications both for the advancement of Antarctic science and the management of Antarctica by the Antarctic Treaty nations.

“Our Deception Island work, using the yacht Pelagic as our base, occurred over 12 days and in the harshest of conditions — persistent clouds, precipitation, and high winds, the latter sometimes reaching gale force and requiring a lot of patience waiting out the blows,” said Mr. Naveen. “But, in the end, we achieved the first-ever survey of all chinstraps breeding on the island.”

The other Inventory researchers on the team were Steven Forrest (Oceanites, Inc.), Dr. Thomas Mueller (Biodiversity and Climate Research Centre), and Dr. Michael Polito (now at Woods Hole Oceanographic Institute). The scientific effort of the Inventory is supported by the U.S. National Science Foundation and public contributions, and the project’s on-the-ground fieldwork at Deception Island was specifically supported by a grant from The Tinker Foundation. The Inventory is the only publicly supported science project working in Antarctica and the only science project tracking penguin populations throughout the entire Antarctic Peninsula region.

The scientific effort of the Inventory is supported by the U.S. National Science Foundation and public contributions, and the project’s on-the-ground fieldwork at Deception Island was specifically supported by a grant from The Tinker Foundation. The Inventory is the only publicly supported science project working in Antarctica and the only science project tracking penguin populations throughout the entire Antarctic Peninsula region.

Deception Island (62°57 S, 60°38 W) is frequently visited and there has been speculation that tourism may have a negative impact on breeding chinstrap penguins — especially, at Deception Island’s largest chinstrap colony known as Baily Head. Previously, Antarctic Treaty-level discussions regarding the management of visitors at Baily Head proceeded in the absence of concrete site-wide census data.

The results and analyses, according to Dr. Lynch, shed new light on the massive changes occurring in this region.

“Our team found 79,849 breeding pairs of chinstrap penguins at Deception, including 50,408 breeding pairs at Baily Head. Combined with a simulation designed to capture uncertainty in an earlier population estimate, there is strong evidence to suggest a significant (>50%) decline in the abundance of chinstraps breeding at Baily Head since 1986/87.

“The decline of chinstrap penguins at Baily Head is consistent with declines in this species throughout the region, including at sites that receive little or no tourism; further, as a consequence of regional environmental changes that currently represent the dominant influence on penguin dynamics, we cannot ascribe any direct link in this study between chinstrap declines and tourism.”

The Baily Head analysis was abetted by Dr. Lynch’s cutting-edge analyses of high-resolution satellite imagery. Images were available for the 2002/03 and the 2009/10 seasons that suggest a 39% decline over that seven-year period, and which provide independent confirmation of this population decline. Via assistance from the U.S. National Science Foundation and a cooperative effort the University of Minnesota’s Polar Geospatial Center, the Inventory continues to demonstrate the use of satellite imagery to analyze and describe environmental change in sensitive habitats.

“We now know,” says Naveen, “that two of the three predominant penguin species in the Peninsula — chinstrap and Adélie — are declining significantly in a region where, in the last 60 years, it’s warmed by 3˚ C. (5˚ F.) annually and by 5˚ C. (9˚ F.) in winter. By contrast, gentoo penguins, the third of these species, are expanding both its numbers and range. These divergent responses are an ongoing focus of our Inventory work effort.”

Adds Lynch: “While there has been considerable focus in the policy and management community about the potential impact of tourism on these penguin populations, we cannot forget the overwhelming evidence that climate is responsible for the dramatic changes that we are seeing on the Peninsula. If tourism is having a negative impact on these populations, it’s too small an effect to be detected against the background of climate change.”