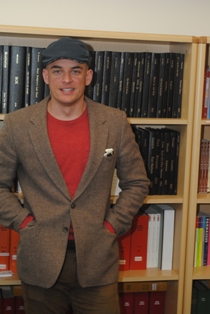 SOUTHAMPTON & STONY BROOK, NY; April 26, 2013 – Stony Brook Southampton MFA in Creative Writing student Brian Abrams has been awarded $4,000 as a winner of the Thayer Fellowship for 2013. The annual fellowship is given to outstanding candidates applying from all the campuses of the State University of New York, funded through an endowment established in honor of Jeanne C. Thayer, Trustee of SUNY from 1974-1984.

Joe Hildreth, artistic director for the Thayer Fellowship in the Arts, made the announcement earlier this month. “The committee of jurors was extremely impressed with Abrams,” said Hildreth, making special note of the way his experiences as a Captain in the United States Marine Corps were reflected in his writings.

Michael Perkins, juror for Creative Writing, said that Abrams’s screenplay about the life of an Iraqi interpreter may well be produced. He went on to say that he is excited about the fellowship winner’s poetic gifts, noting that “with his talents, discipline and drive, he has literary success within his grasp.”

The 30-year-old Abrams, who hails originally from Houston, Texas, and did his undergraduate work at Texas A&M University, is expected to earn his MFA by December of 2013. Upon learning he had won, Abrams said he was “humbled to have been awarded the Thayer Fellowship,” especially in view of the fact that he was competing against “some of the top creative minds in the state, from multiple fields of study.

“Being validated for one’s work is the highest honor an artist can receive,” he added, “and prize money never hurt a young writer either.”

In her letter of recommendation, Whiting Award-winning poet Julie Sheehan, the director of the Stony Brook Southampton MFA in Creative Writing and Literature, wrote that she sees a bright future for Abrams.

“He writes at the highest level in multiple genres—fiction, screenwriting and poetry—and so it’s difficult to predict exactly where his successes will come. Brian’s an original: reflective but outspoken, willing to take risks with his work yet skeptical of flamboyance, a military man with a poet’s touch, a disciplined writer without being formulaic.”

Among other projects, Abrams is currently working on his thesis, a screenplay about an Iraqi interpreter embedded in an American military unit, under the advisement of screenwriting professor and Screenwriting Conference Director Annette Handley Chandler. In her letter of recommendation, Handley Chandler saluted the first-time screenwriter, averring that he has the kind of “fresh, original voice and ability to write visually and create characters that will attract the right director and actors.”

In addition to his thesis, Abrams is currently finishing a collection of stories, essays, and poems, primarily based on his experiences as a Marine infantry officer in Iraq and elsewhere. He and his wife, who are currently living in Sag Harbor, New York, are expecting their first child in October and are “thrilled to be starting our new family.”

Abrams, who started his post-graduate writing studies at The New School in New York City, enrolled in the Stony Brook Southampton MFA program after interrupting his studies to do volunteer work in Africa, where he met his future wife. After the two were married in the UK, they moved to New York, and it was then that Abrams made what he calls “the best educational move of my life.”

“I love the school, classes, peers, faculty, the laid-back family atmosphere,” he said recently, “and the fact that the faculty works so closely with the students in a mentorship approach. My creativity has grown tremendously here.”

Each year, a Thayer Fellowship in the amount of $7,000 is awarded to one student or shared between two students who demonstrate outstanding achievement and high professional potential in the arts. Both the Thayer and the $1,000 Patricia Kerr Ross Award are intended as a bridge between SUNY study in the arts and entry into a professional career in the arts, to assist SUNY’s most talented young artists at the most difficult period of time for a young professional, when the struggle to make a living can overwhelm even the most dedicated individual. The fellowship helps the artist take advantage of important opportunities in developing a professional career.