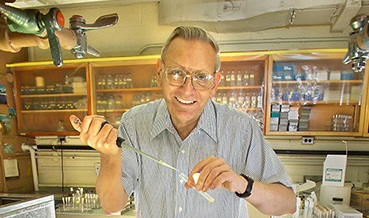 STONY BROOK, N.Y., December 13, 2018 – F. William Studier, Adjunct Professor of Biochemistry at Stony Brook University and a Senior Biophysicist Emeritus at the U.S. Department of Energy’s Brookhaven National Laboratory, has been elected as a Fellow of the National Academy of Inventors (NAI).

Election as an NAI Fellow is the highest professional distinction accorded to academic inventors who have demonstrated a prolific spirit of innovation in creating or facilitating outstanding inventions that have made a tangible impact on the quality of life, economic development and welfare of society.  Studier be inducted as an NAI Fellow during its 2019 national meeting in Houston on April 10.

Studier is best known for his invention of an efficient system for engineering common E. coli bacteria to produce almost any desired protein from a cloned gene. Known as the T7 expression system, this metho

d leverages knowledge gained from basic studies of how T7 bacteriophage (a virus that inserts its DNA into an E. coli cell) rapidly redirects all activity in the cell to producing new T7 viruses. The T7 expression system uses crucial elements of T7 DNA to redirect most of the protein production in the cell toward a single protein specified by a cloned gene. The system has been useful for producing a wide range of proteins.

In the course of his studies, Studier developed other tools for molecular biology, including methods to measure the size and shape of single- and double-stranded DNA, and slab-gel electrophoresis for studying proteins and nucleic acids. These tools, along with the T7 system, are now used in biochemistry and structural biology labs around the world for basic biomedical research and practical applications, including medical diagnostics and treatment.

Approximately 800 companies have licensed the T7 system, which has earned Brookhaven Lab much of its royalty income over the years. These T7 licenses and licenses for the auto-induction bacterial growth media have resulted in royalties and license fees totaling about $72 million—income that helped the Lab to fund strategic research and deployment, maturation of promising technologies, and educational programs.

Studier earned a B.S. in biophysics from Yale in 1958, followed by a Ph.D. from the California Institute of Technology in 1963. He worked as a postdoctoral fellow in the Department of Biochemistry at Stanford University School of Medicine, and then joined Brookhaven Lab’s Biology Department in 1964 as an assistant biophysicist. Over the years, Studier rose through the department’s ranks, receiving tenure in 1971 and becoming a tenured senior biophysicist in 1974. He served as chair of the Biology Department from 1990 to 1999 and then returned to research. His achievements have been recognized by election to the American Academy of Arts and Sciences in 1990, the National Academy of Sciences in 1992, and as a Fellow of the American Association for the Advancement of Science in 2007. Retired from Brookhaven Lab in 2015, he retains the title of Senior Scientist Emeritus. He holds 15 patents of which 9 patents have been licensed and commercialized, including those on the T7 system, which is the most successful Brookhaven Lab technology invented to this day.