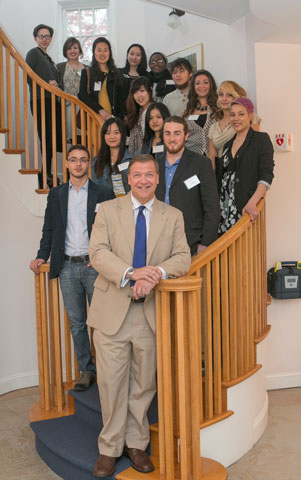 rankings report released today. US News & World Report defines the best national universities in America as universities that “are typically large institutions that focus on research and grant bachelor’s, master’s, and doctoral degrees.” Stony Brook achieved another best ranking ever in the annual US News survey by ranking 34th in the category of Top Public National Universities.

“For the second year, Stony Brook’s ranking has jumped ten spots or greater among National Universities in the US News ranking report,” said Stony Brook President Samuel L. Stanley Jr., M.D. “That is significant in that we strive to provide a high quality education at an affordable price in fields that offer excellent career opportunities for our students. These rankings are a testament to the hard work and dedicated efforts of our faculty and staff and they can all share in, and take pride in this achievement.”

“As we continue to work with Governor Cuomo to position SUNY and New York to lead in affordability, access, and quality, and President Obama puts these issues into focus nationally, we are proud to be recognized and ranked favorably by U.S. News & World Report,” said SUNY Chancellor Nancy L. Zimpher. “Congratulations to Stony Brook and the many campuses representing SUNY on this list.”

Part of the State University of New York system, Stony Brook University encompasses 200 buildings on 1,450 acres. Since welcoming its first incoming class in 1957, the University has grown tremendously, now with more than 24,000 students and 2,200 faculty. Its membership in the prestigious Association of American Universities (AAU) places Stony Brook among the top 62 research institutions in North America. Kiplinger named Stony Brook the 22nd best value in public colleges for in-state students and 9th for out-of-state students. One of four University Center campuses in the SUNY system, Stony Brook University co-manages Brookhaven National Laboratory, putting it in an elite group of universities that run federal research and development laboratories. As the largest single-site employer on Long Island, Stony Brook is a driving force of the regional economy, with an annual economic impact of $4.65 billion, generating nearly 60,000 jobs, and accounts for nearly 4% of all economic activity in Nassau and Suffolk counties, and roughly 7.5 percent of total jobs in Suffolk County.