Benjamin S. Hsiao Named a Fellow of the American Association for the Advancement of Science 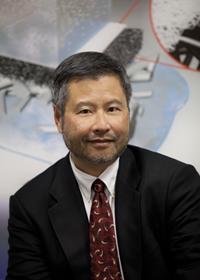 Benjamin S. Hsiao Named a Fellow of the American Association for the Advancement of Science

SBU Chemistry Department Chairman cited for his contributions to the fields of polymer sciences, water purification, chemical research and education

STONY BROOK, NY, January 27, 2012 – Benjamin S. Hsiao, PhD, chair of the Department of Chemistry at Stony Brook University, who has achieved international prominence in the field of polymer science, has been named a Fellow of the prestigious American Association for the Advancement of Science (AAAS) for his distinguished contributions to the fields of polymer sciences and water purification, as well as to chemical research and education at Stony Brook University.

“It is truly an honor to be recognized by the AAAS for my efforts and contributions to the scientific community,” said Dr. Hsiao. “While I am humbled by this recognition, I also feel boosted as I move my research forward.”

Dr. Hsiao’s research involves the production of filters using nanoscale cellulose fibers derived from plants and trees. Using chemical methods to dissolve non-crystalline portions of the cellulose, the process leaves behind nascent crystals that can be collected and used to purify dirty water. Dr. Hsiao noted that the crystals are so small (diameter in the range of a few nanometers) and contain so much surface area that they are capable of trapping bacteria and viruses.

The practical application of these nanofilters is water purification systems in poor countries in areas without access to larger purification systems. “They are extremely small and chemically stable. They are cheap, effective and harmless to people,” he said. “They could make life better. Imagine not having the infrastructure to filter dirty water.”

“Ben Hsiao’s leadership as Chair of the Chemistry Department has been instrumental in making it one of the top departments in the country,” said Dennis N. Assanis, Provost and Senior Vice President for Academic Affairs at Stony Brook University. “Chemistry plays an important role in interdisciplinary research at Stony Brook and we look forward to Dr. Hsiao’s continued contributions and advancements in issues of global sustainability, including his work in water purification, chemical research and polymers science.”

Dr. Hsiao also has extensive research expertise and synchrotron experience in the areas of structure, morphology, property and functionality relationships in polymers. Currently, his research interests are focused on the use of nanostructured polymers for medical, environmental and energy applications. Based on his recent work on nanofiber technology, he and his colleague Benjamin Chu, have developed a new class of membranes for medical applications, such as anti-adhesion and tissue engineering.

Dr. Hsiao was born in Taiwan and received his BS degree in Chemical Engineering from National Taiwan University in 1980. Two years later, he came to the U.S. for graduate studies, receiving his PhD degree in Materials Science at the University of Connecticut and his post-doctorate training in Chemistry and Polymer Science & Engineering at the University of Massachusetts. He later joined the E.I. DuPont Company as a staff scientist in the Experimental Station in Wilmington, Delaware, and spent eight years in research and development before joining the Chemistry Department at Stony Brook as an assistant professor in 1997. He became a full professor in 2002, and in 2007 became chair of the Chemistry Department. Dr. Hsiao‘s success in research, education and administrative leadership is punctuated by his multi-disciplinary background, using his diverse experiences in industry and academia to create a vision of inclusion, collaboration and excellence in dealing with students, colleagues and staff members on teaching, research and administrative affairs.

Dr. Hsiao has published more than 355 peer-reviewed scientific papers, 37 reviews and chapters in books and encyclopedias, 219 conference proceedings, 14 issued and 18 pending patents, and has edited two books. He has also given more than 230 invited lectures in universities, governmental and industrial research institutes, and more than 445 presentations in national and international scientific meetings. His major research accomplishments are in three areas: development of frontier synchrotron x-ray scattering for polymer research, advancement of fundamental understanding of polymer physics, and applications of nanofiber technology for health and environmental applications.

In November, the AAAS Council elected only 539 of its more than 125,000 members to this elevated rank because of their efforts toward advancing science applications that are deemed scientifically or socially distinguished. AAAS will recognize Dr. Hsiao at the Fellows Forum to be held on February 18, 2012, during their annual meeting in Vancouver, British Columbia. The new Fellows will receive a certificate and a blue and gold rosette as a symbol of their distinguished accomplishments.