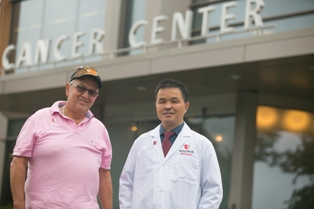 STONY BROOK, NY, October 23, 2012 – Thinking he had only months to live, Frank Tarantino, 67, of Amityville, N.Y., a retired electrician, father of four and grandfather of seven, was getting his affairs in order in the winter of 2011. Doctors believed he had a lethal brain tumor. Tarantino, a prostate cancer survivor, had just finished treatment for breast cancer in late 2010. One consulting physician, Shenhong Wu, MD, PhD, Associate Professor of Medicine, Stony Brook University School of Medicine, and an oncologist at the Stony Brook University Cancer Center, could not conclude Tarantino had cancer. The question remained in Dr. Wu’s mind: If not cancer, what could this be?

Tarantino, not under Dr. Wu’s care at the time, was diagnosed by other oncologists with  leptomeningeal carcinomatosis, a type of tumor that spreads from the breast. Patients with this form of cancer often live only two-to-three months. Because of the grim prognosis and Dr. Wu’s lingering doubts on a definitive diagnosis, Tarantino decided not to undergo treatment.

Fast-forward months later: After intermittent episodes that included headaches, fatigue, vertigo/dizziness, and sometimes confusion, Tarantino was rushed to a hospital near his home. New symptoms included increased confusion, low-grade fever, and hearing loss. Physicians at the hospital called Dr. Wu, who promptly made a recommendation.

“I suggested that they check his spinal fluid for possible infection,” said Dr. Wu. “With his additional symptoms, increased severity of them, and the fact that he survived those months with what appeared to be a cancerous brain tumor, it seemed infection was a strong possibility.”

The spinal fluid tested positive for Cryptococcus, a type of fungus that can cause serious and sometimes deadly systemic infections. Particularly vulnerable are patients treated for cancer or chronic illnesses where treatments and/or the disease itself compromise the patient’s immune system. Most common in AIDS patients, Cryptococcal fungal meningitis cases have increased globally during the past decade. National health data estimates the incidence to be approximately 1,500 cases annually in the U.S. Fungal infections are of particular concern to clinicians when they become systemic, such as in the blood or neurological system.

“This was a tricky diagnosis,” explained Dr. Wu. He was not convinced Tarantino had brain cancer, based on the imaging of his brain lesions and his fluctuating symptoms. He remained concerned that potentially unnecessary and ineffective treatment for brain cancer would make Tarantino, already immunocompromised by cancer treatments, dangerously ill.

“Originally, Mr. Tarantino’s case seemed like cancer because the lesions on his brain did appear like tumors, some of his symptoms pointed toward brain cancer, and he had a significant history of cancer,” said Dr. Wu. “However, I did not think everything matched up to be cancer, so I could not conclude it was cancer,” who provided his medical opinion to Tarantino, previously treated for prostate and breast cancer at other hospitals.

“The tests showed Mr. Tarantino had atypical cells in the spinal fluid, mostly T lymphocyctes and monocytes,” said Dr. Wu. “These results are an indication that something abnormal is occurring, but they are not definitive markers for cancer or infection. Although a small chance, infection seemed like a possibility.”

The original diagnosis was a blow to Tarantino and his wife of 43 years, Rosanne, as well as his entire family, all of them living on Long Island.

“I started to get my things in order because the writing was on the wall – I would not be around for much longer,” said Tarantino. “I was just feeling better when the episodes began to happen.”

A retiree who had spent more than 30 years working as an electrician, Tarantino had a busy family life and stayed active by working on projects, such as refurbishing old cars from the 1960s and 70s. His life slowed down when he was treated for prostate cancer but completed treatments in 2006. Two years later, he was diagnosed with breast cancer, completing his treatment by the end of 2010.  Back to his life in early 2011, though still recovering from breast cancer treatment, the intermittent episodes began.

Tarantino’s infection was advancing quickly and spreading within his brain. He required immediate, aggressive, and long-term antifungal treatments in the hospital.

“It took months to get that crazy infection under control, but the doctors at Stony Brook did it and eventually I started feeling like myself again,” said Tarantino. “It really was miraculous, and I am grateful that Dr. Wu continued to think that I did not have brain cancer.”

Tarantino remains free of prostate and breast cancer. He continues to take antifungal medication and is followed by Drs. Wu and Steigbigel.

With restored health and energy, Tarantino and Rosanne are on the go. Last spring they enjoyed one of their son’s weddings, and this past summer traveled to Las Vegas and Mexico.

“I have been through a lot, and my body took a beating, but each week I feel stronger,” said Tarantino. “Maybe soon I can get back to restoring the old cars and start with the 1966 Chevy Chevelle.”

Systemic Fungal Infections and Research at Stony Brook
Systemic fungal infections are serious and sometimes life-threatening conditions, especially in immunocompromised patients such as those with cancer, AIDS, and other chronic illnesses. While effective in certain cases against systemic disease, current antifungal medications have shortcomings. Many drugs are highly toxic. Agents that attack fungal pathogens also target the wrong (and healthy) cells because the cells of humans are similar in structure to that of fungi.

Dr. Maurizio Del Poeta investigates Crytococcal neoformans. Dr. Del Poeta has found that the role of certain lipid molecules, particularly sphingolipids, located on the surface of this fungus, is essential in the development of cryptococcal meningitis. He has discovered new drugs that target the synthesis of these fungal lipid molecules, thus preventing fungal meningitis. His discovery offers a potential new approach to treating systemic fungal infections.

Dr. James Konopka investigates Candida albicans, which can cause lethal systemic infections. Dr. Konopka’s research has shown that a novel type of structure in the cell membrane of Candida known as the MCC/eisosome represents a promising new target for therapeutic intervention.