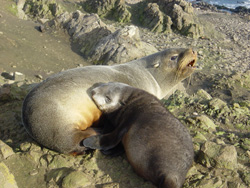 Eating Habits Hard to Break for Penguins and Fur Seals

STONY BROOK, NY, February 10, 2009 – Chinstrap penguins and fur seals showed persistent preferences for particular foraging areas even after a storm reduced the availability of food of choice in those areas, according to a study by Dr. Joseph Warren, Assistant Professor in the School of Marine and Atmospheric Sciences at Stony Brook University and colleagues, published in the January issue of Marine Biology. Entitled, “Submesoscale distribution of Antarctic krill and its avian and pinniped predators before and after a near gale,” the team’s research shows that the spatial distribution of fur seals and foraging chinstrap penguins did not change after a near gale, despite substantial changes in the abundance and distribution of their prey, Antarctic krill.


“In order to better understand how energy moves through an ecosystem, we need to have a better understanding of how predator-prey interactions are affected by environmental conditions,” said Dr. Warren. “The storm that occurred between our two ship-based surveys created a perfect ‘natural experiment’ which allowed us to take ‘before’ and ‘after’ measurements and examine how the nearshore ecosystem north of Livingston Island Antarctica was affected by the winds and waves.”


Antarctic krill are 1-2 inches long crustaceans that play a critically important role in the ecosystem because so many other animals rely on krill as their primary food source. Dr. Warren and colleagues found that the storm reduced the concentration of krill in their study area to roughly half what it was before the storm, likely because currents pushed the krill off shore.  They also observed that after the storm, krill were found in different geographic areas within the study site.


When Antarctic krill abundance decreased in certain areas after the storm, Dr. Warren and colleagues found that feeding aggregations of cape petrels, which are flying seabirds that eat krill, also decreased in those areas. However, other krill predators did not change their foraging behaviors in response to changes in krill distribution. Chinstrap penguins, which are swimming seabirds, and fur seals, which are marine mammals, both showed little change in their distribution after the storm.

“Relative to cape petrels, penguins and fur seals may not be as dependent on finding prey over small time scales due to their longer foraging-trip length and energy-storage capacity,” said Dr. Warren. “If the changes due to a storm are relatively short-lived, penguins and seals may not need to alter their habits and can stick to their familiar feeding areas.”

The School of Marine and Atmospheric Sciences (SoMAS) is the State University of New York’s center for marine and atmospheric research, education, and public service. The expertise of SoMAS faculty places them in the forefront in addressing and answering questions about immediate regional problems, as well as long-term problems relating to the global oceans and atmosphere.