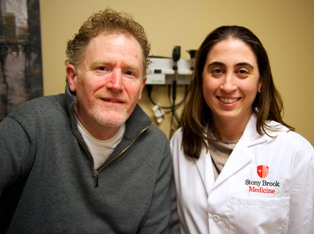 ALS is a rapidly progressing, incurable and fatal neuromuscular disease characterized by progressive muscle weakness that results in paralysis. As the nerves to the diaphragm muscles fail, patients lose the ability to breathe without ventilator support. Approximately 30,000 people in the United States live with ALS, and more than 5,600 new cases are diagnosed each year. Approximately 3,300 of those patients have respiratory problems and partially intact phrenic nerves, making them potential candidates for the DPS implant procedure, according to Synapse Biomedical, maker of the device.

Hayden, a three-time James Beard Foundation Award finalist for best chef in the Northeastern U.S. and the only chef from Long Island ever nominated for the award, said he hopes the device will extend his ability to use his diaphragm to breathe on his own by as much as 16 months. He suffers weakness on the right side of his diaphragm muscle, he said. Ten days after the procedure, he was already able to use the device for 3-4 hours a day; his goal through conditioning is to be able to use it around the clock. Currently, his breathing is assisted by a Bilateral Positive Airway Pressure (BPAP) device while he sleeps.

“I hope that this will prolong my diaphragm so that it can continue to work on its own,” he said. “I was very happy I was a candidate for it. If we can get the word out about it, it can help more ALS patients….

“The breathing part of the disease is the worst,” he said. “If it can catch more people early [in their disease process] and help them breathe, it can help patients with their longevity and quality of life.”

Prior to his diagnosis, Hayden served as executive chef at North Fork Table & Inn, which he co-owns with his wife, pastry chef Claudia Fleming, and Mike and Mary Mraz. After he was diagnosed with ALS in 2011, his fellow chefs rallied to his support, raising $110,000 through a celebrity chef fundraiser in Manhattan last summer. Participants included such chefs and friends as Bobby Flay of the Food Network; Tom Colicchio of Bravo reality show Top Chef and co-founder of Gramercy Tavern in Manhattan where Hayden’s wife worked previously; Daniel Boulud, David Burke, and Charlie Palmer of Aureole restaurant, who served as Hayden’s mentor when he worked there.

This fall, Hayden hopes to organize additional events on Long Island to raise awareness and funding for ALS research. He is working with Jeri Woodhouse of Taste of the North Fork in Cutchogue, to create gift packages of sauces to be sold under the name “Hayden’s Heroes” to raise money for the ALS Association of Greater New York, Project ALS and Chris Pendergast’s annual Ride for Life.

Hayden is being treated at Stony Brook University’s Christopher Pendergast ALS Center of Excellence, the only such center in Suffolk County.  “I applaud the surgical team and Dr. Telem for their compassion, commitment and perseverance in making this pioneering procedure a reality,” said Pendergast, a 20-year ALS patient for whom Stony Brook’s center is named. “Stony Brook Hospital’s bold decision illustrates forward thinking and the desire to bring cutting-edge medicine to Long Island’s residents. With DPS, they now have a weapon that hopefully will prove useful in improving the status of a selective group of ALS patients.  It is literally and figuratively a ‘sigh of relief.’”

Dr. Telem is among the nation’s first surgeons to implant the device since it was approved by the US Food and Drug Administration (FDA) in September 2011. “This procedure demonstrates that when it comes to cutting-edge surgery, Stony Brook is the leader on Long Island,” said Alexander B. Dagum, MD, FRCS(C), FACS, Interim Chair of the Department of Surgery and Clinical Professor of Surgery and Orthopaedic Surgery, Stony Brook University School of Medicine. Currently the DPS device is offered at only three hospitals in the Tri-State area (New York, Connecticut and New Jersey), according to the device manufacturer, Synapse Biomedical of Oberlin, OH. The other two facilities are SUNY Upstate Medical Center in Syracuse, NY, and Weill Cornell Medical Center in Manhattan, NY.

Candidates for the DPS device have chronic hypoventilation as a result of ALS, and have a diaphragm that can be stimulated, Dr. Telem said. The nerves supplying the diaphragm are examined through fluoroscopy, ultrasound or EMG to assess if a patient is a good candidate for the procedure.

“Traditionally, we were only able to assist these types of patients with ventilators, which can be cumbersome and not well tolerated by many patients,” Dr. Telem said. The FDA study of the device showed a 16-month improvement in survival for ALS patients from the time they were diagnosed with chronic hypoventilation, she said.

The device is implanted through minimally invasive laparoscopic surgery, said Dr. Telem, who was assisted on the case by Aurora Pryor, MD, FACS, Chief of the General Surgery Division at SBUH. The surgeon creates four dime-sized holes in the abdominal region and inserts a laparoscope to view the diaphragm muscle. Electrodes are attached through wires under the skin to a small external battery-powered pulse generator that stimulates contraction of the diaphragm muscle.

After the procedure, the patient gradually conditions the diaphragm muscle through a series of physical therapy sessions. The device provides electrical stimulation to the muscle and nerves in the diaphragm. When the muscle is stimulated, it contracts, helping to condition the muscle to improve fatigue resistance during normal exertion.