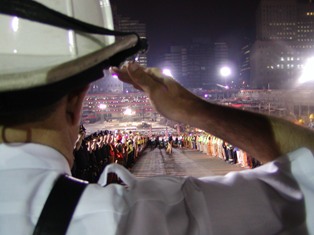 The final photo in “9/11: An American Requiem” show the Honor Guard Ceremony, given for each of the responders lost during 9/11.


STONY BROOK, N.Y., September 7, 2012 – In commemoration of the 11th anniversary of the 9/11 tragedy, Stony Brook University will show “9/11: An American Requiem,” a documentary film produced by Benjamin J. Luft, M.D., Edmund D. Pellegrino Professor of Medicine at Stony Brook University School of Medicine, and Medical Director of the Long Island Clinical Center of Excellence, part of the World Trade Center Health Program. The film features responders to the 9/11 terrorist attacks telling their own gripping and heartbreaking stories, which captures their journeys from the hellish disaster to renewal 10 years later. The film will be shown on September 11 at 6:00 p.m., in Stony Brook University’s Wang Center Auditorium. Registration is required, and seating is limited. For more information, see the 9/11 commemoration page. To register directly, fill out this registration form.

Sponsored by the Stony Brook University Alumni Association and Office of the President, the film event is open to students, faculty, staff, and the community. More than a decade since the September 11 attacks, “9/11: American Requiem” offers a fresh and insightful look into the profound long-term effects on 9/11 responders and the nation as a whole through the voices of responders. The documentary is part “Remembering 9/11,” an oral history project conceived by Dr. Luft.

“The people who responded went on extraordinary journeys that are recalled in this film with great humility,” says Dr. Luft. “They speak to restoration of hope and meaning through a strong sense of community and country, duty and responsibility, brotherhood and tolerance, oftentimes with spirituality and religion. While some think with nostalgia of the ‘Greatest Generation’ of Americans from the past century, in reality, one needs look no further than these September 11th responders to find another Great Generation, right here in our midst.”

Immediately following “911: An American Requiem,” which premiered at the Stony Brook Film Festival in 2011, Dr. Luft will introduce two responders featured in the film. The audience can then participate in a Q & A session with the responders and Dr. Luft.