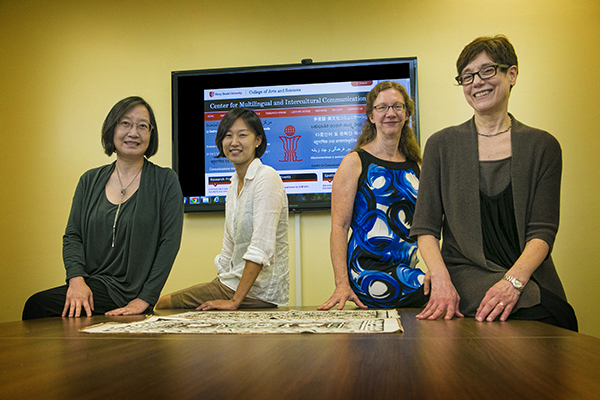 STONY BROOK, NY, September 2, 2015 – A major issue on college campuses is that American undergraduates report that they have difficulty understanding the non-native English speaking instructors who teach sections of their introductory courses.  Now, thanks to a $1M National Science Foundation grant, a new study called Communication in the Global University: A Longitudinal Study of Language Adaptation at Multiple Timescales in Native- and Non-Native Speakers at Stony Brook University will address this issue. Researchers in the Psychology, Linguistics, and Asian & Asian-American Studies Departments in the College of Arts and Sciences will look at communication between native English-speaking undergraduates and non-native English-speaking international PhD students newly arrived in the US, who serve as International Teaching Assistants (ITAs).

Dr. Jiwon Hwang, Stony Brook Research Assistant Professor in Psychology and Lecturer in Asian & Asian-American Studies, who is Principal Investigator on the study, said, “This project is unique because it will observe actual students interacting with their foreign teaching assistants in a real world situation. It will help enhance our current understanding of communication successes, failures and patterns, providing deep insights into how communication can be improved.”

The study will include Stony Brook University international graduate student teaching assistants (ITAs) who are newly arrived in the US, from China and other countries for whom English is not the native language, and the native-English-speaking undergraduate students with whom they interact.  The work aims to measure the changes over time in both parties, uncovering the factors that lead ITAs to improve their English skills over a 2 year period, as well as the factors that lead undergraduates to adapt to foreign-accented speech.

The project will be conducted through Stony Brook’s new interdisciplinary Multilingual and Intercultural Communication (MIC) Center; the actual observation and data collection will take place in math and science classes as well as in Psychology and Linguistics laboratories on campus.