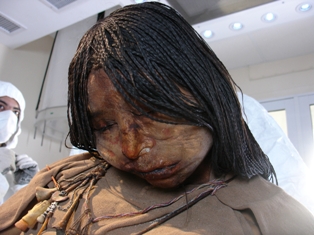 Photo of the 500-year-old mummy known as “The Maiden.”

STONY BROOK
, NY, July 25, 2012 – A team of scientists that used a method of analyzing proteins from samples is the first to detect an immune response from a 500-year-old Incan mummy. Completed at the Proteomics Center, Stony Brook University, the process led to the first positive evidence of active pathogenic infection in an ancient sample of a 15-year-old girl who exhibited an immune response consistent with chronic respiratory infection. Their findings are reported in the PLoS One article “Detecting the Immune System Response of a 500 Year-old Inca Mummy.”

Pathogen detection in human remains, including ancient ones, can help uncover mysteries of past diseases and epidemics and in determining cause of death. Techniques have been largely based on amplification of DNA from microbes. This process is effective for confirming the presence of a pathogen but not for determining if a person was ill with an infectious disease. Angelique Corthals, PhD, a forensic anthropologist at John Jay College of Criminal Justice, who will join the Department of Pathology, Stony Brook University School of Medicine, as Assistant Professor (as of September 1), and her colleagues at Stony Brook University, discovered a way to work around the problem by using a method that systematically profiles and quantifies all the proteins in a sample and does not require fresh tissue.

“The technique enabled us to determine that an infectious agent was active in one of the mummies that we examined,” said Dr. Corthals. “This approach opens a new door to ways in which scientists can more accurately solve some of history’s pressing medical mysteries, such as why the Influenza Epidemic of 1918 was so devastating, or what really caused such high mortality in Plague epidemics.”

Dr. Corthals explained that when a pathogen strikes, the body defends itself by producing a distinct profile of proteins. The most common immunoassay technique that is designed to bind immune system proteins (called antigens), and identify their patterns, is prone to contamination in ancient tissues and requires knowing in advance what kind of pathogen struck the patient. Therefore, Dr. Corthals needed another way to determine the protein profiles directly from archeological specimens.

The team took swabs from the lips of two Andean Inca mummies that were buried in the Andean mountains and preserved when found in 1999. The bodies are currently preserved at the Museum of High Altitude Archeology in Salta, Argentina. After processing the swab samples to separate DNA and proteins, the researchers detected proteins using a high-resolution mass spectrometer and analyzed the sequenced proteins by comparing collected mass spectra to the human protein database.

The key finding resulted from the swab sample of the mummy of a 15-year-old girl, called “The Maiden.” The protein profile from the sample mirrored the ones presented by chronic respiratory patients. Specifically, two groups of protein patterns were consistent with severe inflammation of the lungs.

The swab from the Maiden was further analyzed by amplifying fragments of its DNA in the laboratory of Liliana Dávalos, PhD,  Assistant Professor in the Department of Ecology and Evolution, and member of the Consortium for Inter-Disciplinary Environmental Research (CIDER), Stony Brook University. This analysis revealed the presence of probable pathogenic bacteria in the genus Mycobacterium, pathogens that cause upper respiratory tract infections and tuberculosis.

In addition, computed tomography (CT) scanning, along with visual and radiologic examinations of the Maiden, also revealed pathologies consistent with a wide range of infectious diseases. The examinations showed inflammation on her upper right lung and mucosal enlargement in her sinus cavity.

“The mass spectrometry-based proteomic application is a powerful complement to forensic DNA analyses and other examinations that point to pathogens,” said Dr. Dávalos. “Completing each of these analyses and tests helps determine what infectious agent caused disease and the extent of active infection in the host.”

The research team identified three distinct advantages that proteomics has over other methods in archeological and forensic research. First, proteins can outlast DNA by thousands to millions of years, enabling scientists to seek answers to disease and immunity much further back in time. Second, protein detection does not rely on amplification, so it is less susceptible to in-lab contamination. Third, a broad spectrum of proteins can be characterized from small samples, which results in a more resolved picture of immune response than from immunoassays.

The research was supported in part by the National Institutes of Health, the National Geographic Society, and the Secretariat of Culture of the Province of Salta, Argentina.