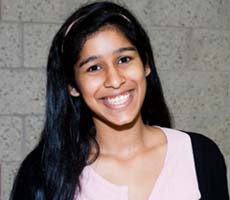 Stony Brook University faculty mentored 15 awardees from Long Island – 13 semifinalists and two regional finalists. Additionally, they mentored one regional finalist from Oregon; and semifinalists from California (7), Connecticut (1), New Jersey (1); and upstate New York (1). Among those mentored at Stony Brook University, 13 were mentored by Dr. Miriam Rafailovich, Professor Department of Materials Science & Engineering and Director of the Garcia Center for Polymers at Engineered Interfaces. Professor Rafailovich is one of the nation’s leading mentors of research competition talent and has formed collaborative, interdisciplinary networks with faculty throughout the campus.

Professor Rafailovich and Dr. Marcia Simon, Professor and Director of Graduate Studies, Department of Oral Biology and Pathology, were co-mentors on the two regional finalists from Long Island – senior Evan Chernack who attends South Side HS in Rockville Centre and junior Aneri Kinariwalla, who attends Sayville HS in Sayville. Professor Iwao Ojima, Distinguished Professor in the Department of Chemistry and Director of the Institute of Chemical Biology and Drug Discovery, mentored Stony Brook’s third regional finalist, senior Raghav Tripathi who attends Westview HS in Portland, OR.

Regional finalists will compete in one of six regional competitions during November with winners of the regional events earning the right to compete at the National Finals at George Washington University in Washington, DC, in early December. $500,000 in scholarships will be awarded at the National Finals, including two top prizes of $100,000 (individual and team). In previous years, grand prize winners in both individual (2009) and team categories (2001, 2007) worked with Stony Brook faculty mentors including, Carlos Simmerling and Iwao Ojima of the Department of Chemistry; and Miriam Rafailovich of the Department of Materials Science & Engineering. Click here to view the entire listing of the Siemens regional and semifinalists and their mentors.