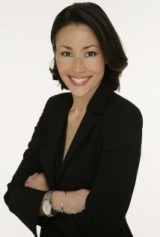 STONY BROOK, NY, March 3, 2015
– On Tuesday, March 10 at 8 p.m., Stony Brook University welcomes five-time Emmy Award-winning NBC News anchor and correspondent, Ann Curry, who will deliver the Marie Colvin Distinguished Lecture at Staller Center for the Arts. The talk is free and open to the public.

Curry, who has been honored with the Simon Wiesenthal Medal of Valor for her reporting from Darfur, will talk on various topics, including her experience as an international news correspondent – most recently while in Geneva covering the controversial nuclear arms talks with Iran. Throughout her career, her reports have aired on Dateline, NBC Nightly News and MSNBC.

After 25-years with NBC News, Curry left to form her own production company in conjunction with NBC Universal. During her tenure at the network, Curry served as news anchor for the Today show, as the program’s co-host and as a widely traveled national and international correspondent.  Her assignments took her to major news events and hot spots across the globe, including to Iraq, Rwanda, Pakistan, Haiti, Sudan and Japan.

The Colvin Lecture series is devoted to perpetuating the memory and values of Marie Colvin, a distinguished and courageous journalist and Long Island native who was tragically killed covering the war in Syria in 2012. Following her death, the Colvin family helped establish the Marie Colvin Center for International Reporting at Stony Brook‘s School of Journalism. Previous speakers in the lecture series include Christiane Amanpour and Clarissa Ward.

Curry, who joined the Colvin Center’s Advisory Board last year, said “Interacting with the young, bright and curious is one of my greatest joys, but also I think responsibilities. I hope among those who gather in the audience will be at least one willing to change the world with truth, as Marie Colvin did.”

Catherine Colvin, Marie’s sister and the chair of the Advisory Board, said, “We are honored to have Ann Curry as a speaker. The strength of character she has shown in adversity, her commitment to bringing accurate and important news to the public and her interest in nurturing young journalists reflect so many of the attributes that defined Marie. We are looking forward to hearing her perspectives during this incredibly dangerous and tumultuous time for journalists.”

Howard Schneider, the dean of the School of Journalism, said, “Check the news on any given day, and you’ll be struck by portentous events unfolding thousands of miles away, whether it’s another horrific attack by ISIS, the outbreak of a ravaging disease like Ebola, or an economic crisis spinning out of control in Europe. The headlines can be scary, the events confusing. So it’s never been more important to prepare a new generation of journalists who can report these stories thoroughly and accurately.”