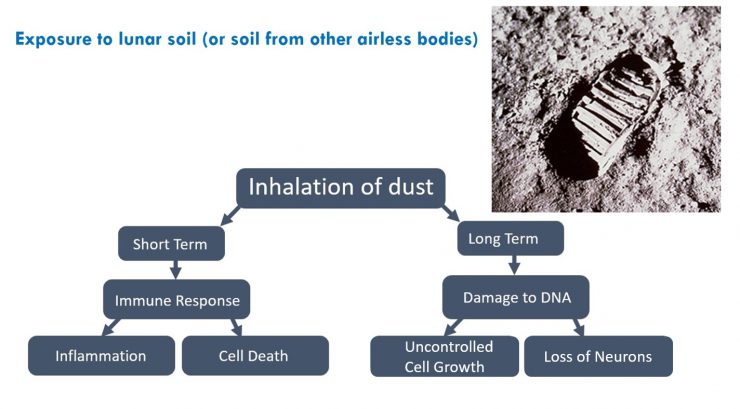 STONY BROOK, NY — May 4, 2018 — Future astronauts spending long periods of time on the Moon could suffer bronchitis and other health problems by inhaling tiny particles of dust from its surface, according to new research.

“There are risks to extraterrestrial exploration, both lunar and beyond, more than just the immediate risks of space itself,” said Rachel Caston, a geneticist at Stony Brook University School of Medicine and lead author of the new study inGeoHealth, a journal of the American Geophysical Union.


Early warnings of toxicity
The Moon has no atmosphere, so its soil is constantly bombarded by charged particles from the upper layers of the Sun that stream through space. These charged particles cause lunar soil to become electrostatically charged, like static cling on clothing.

Exposing cells to dust particles
In the new study, Caston and her colleagues exposed human lung cells and mouse brain cells to several types of lunar soil simulants. Samples of lunar soil are too scarce and valuable to use in everyday experiments, so the researchers used dust samples from Earth that resemble soil found in lunar highlands and the Moon’s volcanic plains.

The project emerged from interactions in the Consortium for Inter-Disciplinary Environmental Research (CIDER). CIDER brings together faculty at Stony Brook University from diverse disciplines, housed in many departments, to create synergistic collaborations that could address large, complex environmental issues. This study was funded by NASA.