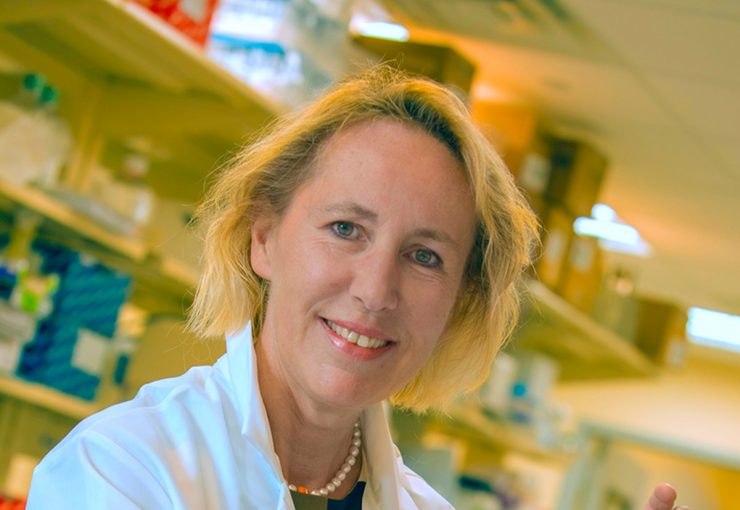 Stony Brook, NY, August 15, 2018 – By genetically manipulating and removing the most common mutant form of the p53 gene that promotes colorectal cancer in humans, an international team of scientists demonstrated that this therapy reduces tumor growth and tissue invasion. Led by Ute Moll, MD, Professor and cancer biologist in the Department of Pathology at Stony Brook University School of Medicine, the findings are published in
Cancer Cell
.

Specific ‘hotspot’ mutations of p53 have recently been recognized as strong promoters of cancer in humans. About 60 percent of colorectal cancers harbor p53 mutations. The challenge for scientists has been discovering whether and which mutant forms of p53 are best to target  – and in which tumor entity – in order to halt the cancer process or slow it down. In this study, Dr. Moll and colleagues assessed one of the three most common p53 mutants in colorectal cancer  – mutp53 R248Q, exchanging an Arginine (R) for a Glutamine (Q) – in a high fidelity genetic mouse model of the disease.

As an underlying mechanism they identified that the mutant p53 protein (produced from its corresponding gene), which is highly stabilized in the tumor cells, binds to and activates Stat3, a key tumor promoter. This promotes cancer progression and correlates with poor outcomes in humans and mice. The researchers demonstrated that Stat3 activation via the mutant p53 protein mediates tumor growth and invasion. They also showed that many human cancer entities including gastrointestinal cancers with R248 mutations are associated with poorer patient survival compared to those with nonR248 mutations of p53.

Moreover, the researchers found that genetic deletion of mutant p53 was only one way to slow down tumor growth and progression.

They also discovered that inhibiting the folding chaperone enzyme Hsp90 – which they discovered earlier to be responsible for mutant p53 protein stabilization – by a small molecule drug called 17AAG, Stat3 signaling, tumor growth and progression of mutp53-driven tumors were equally stopped.

“We discovered that in p53-mediated colorectal cancer driven by the most common mutant form of p53, there is an exploitable tumor dependence on continued expression of the mutant protein for the tumors to thrive,” said Dr. Moll.  “Our data suggest that this and similar p53 mutants represent actionable drug targets responsive to treatment by removal, for example with Hsp90 inhibitors,” she summarized.

Dr. Moll will expand on this research and conduct experiments in other tumor entities in her new cancer lab located in Stony Brook University’s soon-to-open Medical and Research Translation (MART) Building.

Co-authors of the paper include researchers from the Institute of Molecular Oncology, Department of Pathology, and Department of General, Visceral, and Pediatric Surgery at the University Medical Center in Göttingen, Germany.

The research is supported in part by the National Cancer Institute and the German National Science Foundation (DFG).