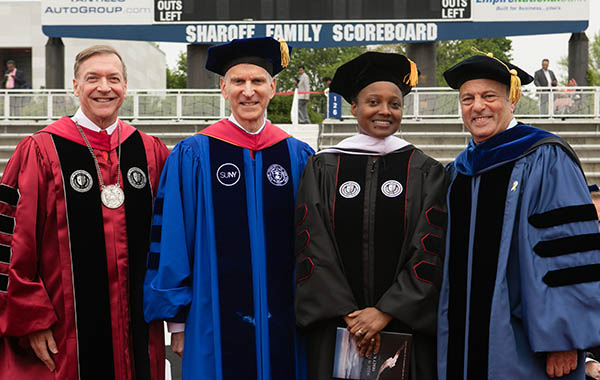 
STONY BROOK, NY– May 18, 2018 — Stony Brook University honored the largest graduating class in its history, granting degrees to 7,350 of the world’s brightest minds today at Kenneth P. LaValle Stadium. The Class of 2018 joins the ranks of more than 170,000 Seawolves worldwide, united by a vision of a bold new future.


To Editors: For more photos, please go to flickr


“The data shows that employers and graduate schools recognize the value of your degree, and that helps explain why 92 percent of you will be employed or in graduate school six months from now,” said Stony Brook University President Samuel L. Stanley Jr. President Stanley affirmed his confidence in the graduates and the value of their education in his address to the Class of 2018.

“As pleased as we are with that statistic, we will continue to push for excellence, and continue to make your Stony Brook degree and your University something you can always be proud of. You should expect nothing less,” he said.

Accepting the honorary degree of Doctor of Letters was Poet Laureate of the United States, Tracy K. Smith. An acclaimed poet, Pulitzer Prize-winning writer and professor at Princeton University, Smith spoke about the importance of language, urging the graduates to use words with care, integrity, and discipline.

“Every mindful action has the potential to be troubling,” she added. “Be poets, pushing your words, your thoughts, your wishes and your dreams to a place where ‘troubling’ is possible.” Smith closed with a reading of her poem Wade in the Water. “Choose, like a poet, to live in a vocabulary that names things in their realness and sometimes troubling complexity,” she said.

Earlier, at the Doctoral Hooding Ceremony held May 17, Atefeh Riazi ‘84 received an honorary Doctor of Science degree. Riazi is chief information technology officer for the United Nations, with responsibility for all of the organization’s needs relating to information and communications technology, and is founder of CIOs Without Borders, a global NGO focused on using technology to provide education, healthcare and infrastructure services to those in need.

Remarks were also delivered by U.S. Senator Charles Schumer (D-NY), who congratulated the Class of 2018, described his own path to success and hailed Stony Brook as “one of the best institutions of higher learning, not just in Long Island or New York, but in the whole world as well.”

Several members of the Class of 2018 were acknowledged by President Stanley for their resilience and extraordinary accomplishments. Among them were:

President Stanley also called out the ten graduating members of the women’s lacrosse team, who could not be in attendance due to being on the road in preparation for their next game. The team is currently undefeated, ranked first in the nation and pursuing the National Championship.

“The senior student athletes on this team (and their teammates) have the same characteristics that you are graduating with…they are committed to excellence, and are willing to put in the hard work to achieve that goal,” President Stanley said of the team. “They can compete with and beat anyone from any other college and university, at any time or any place. That’s Stony Brook pride and spirit, and that’s what you possess.”

Also among the graduates were Helena Roura, 44, and her daughter, Anastasia Roura, 24, both of Mastic. Helena put her own dreams on the back burner to start a family more than 20 years ago, but today the pair turned their tassels side-by-side.

The Class of 2018 is the largest and most diverse in the University’s history, boasting graduates from 43 states and 73 countries. The graduates range in age from 18 to 77.

Representing them at Commencement was student speaker Eshani Goradia, a self-described “brown kid from a super-competitive high school,” who described “falling in love” with Stony Brook and shared the roller coaster of emotions she endured in her early days on campus while living away from home for the first time.

Senior Class Representative Fuad Faruque presented President Stanley with a class gift of $21,785 to the Stony Brook Foundation. The gift will be used to support the Stony Brook Fund for Excellence, General Scholarships, the School of Medicine, the School of Nursing, the Marching Band, Student Life, and the Staller Center, among other causes close to the graduates’ hearts.