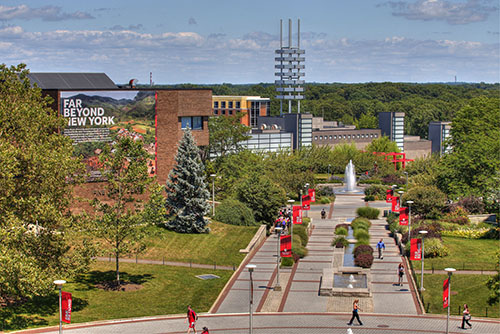 May 4, 2018-–Stony Brook, NY–Stony Brook University has been identified by Forbes as one of the top large companies at which to be an employee in America. Stony Brook is one of only 25 educational organizations to make the list and was #16 of all colleges and universities. It was the only Long Island university or college named and one of two Long Island companies selected.

Almost 30,000 employees at companies with at least 1,000 people were surveyed for the America’s Best Employers List. The survey was conducted with global digital data collection partners who use innovative technology and proven sampling methodologies to facilitate a deep understanding of consumer opinions and behavior. Participation in the survey was voluntary, and respondents were recruited from thousands of sources to maximize reach and representation. Besides more than 30 detailed questions about working conditions, the American employees were asked to determine, on a scale of zero to 10, how likely they were to recommend their employer to someone else. And further, how they feel about the other employers in their respective industries. The mix of respondents (gender, age, region, and ethnicity) in the sample represents American employees. In total 1,000 employers have been awarded. Of those awarded 500 are large employers and 500 are midsize employers.