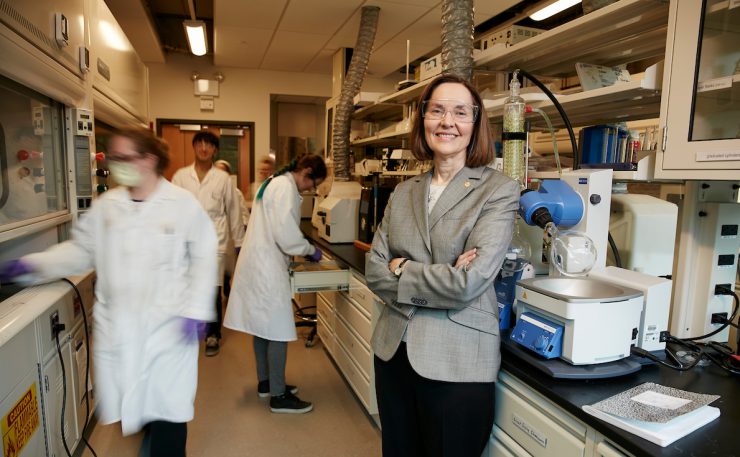 Stony Brook, NY, April 25, 2018 –
Esther Sans Takeuchi, PhD, the William and Jane Knapp Endowed Chair in Energy and the Environment, a Distinguished Professor of Chemistry in the College of Arts & Sciences  and in Materials Science and Chemical Engineering in the College of Engineering and Applied Sciences at Stony Brook University, Chief Scientist of the Energy Sciences Directorate at Brookhaven National Laboratory and the holder of more than 150 patents has been named a finalist for the European Inventor Award. The European Patent Office (EPO) selected Professor Takeuchi as a finalist in the category of “Non-EPO countries.” The winners of the EPO’s 2018 innovation prize will be announced at a ceremony in Paris on June 7.

“Sans Takeuchi’s innovative work on energy storage and power sources is enabling life-saving technologies that benefit millions of heart-failure patients,” said EPO President Benoît Battistelli, announcing the European Inventor Award 2018 finalists. “Her developments in the field of battery technology have also made her one of the most prolific US women inventors.”

Patients at high risk of heart attack often receive pacemakers, and more frequently today, sophisticated implantable cardiac defibrillators (ICDs). These devices detect and correct irregular, potentially fatal, heart rhythms, thereby safeguarding millions of lives. The fitting of these devices, and the replacement of the batteries that run them, involves surgery, with its attendant hazards. Sans Takeuchi developed a battery with a nearly fivefold increase in lifespan that greatly reduces the number of times an ICD wearer might have to go through such an operation. This has led not only to an advance in battery chemistry but wider acceptance of a life-saving ICDs and a significant improvement in patient well-being.

Her career has been dedicated to electrochemistry and more specifically battery technology. Sans Takeuchi’s invention of the compact lithium/silver vanadium oxide (Li/SVO) battery enabled the wide-spread introduction of modern implantable cardiac defibrillators (ICDs). With about 300,000 of these devices implanted each year, they are literally life-savers – using a high-voltage shock to reset the heart and prevent sudden death in high-risk patients who are susceptible to cardiac arrest.

Sans Takeuchi’s Li/SVO battery extended the power-source lifetime for ICDs to around five years and played an important role in their widespread adoption beginning in the late 1980’s. The battery technology was first employed in an implanted ICD in 1987 and commercialised by Greatbatch, which now manufactures ICD batteries based on the invention and licenses the technology to two other battery suppliers Li/SVO remains the most commonly used battery chemistry in ICDs and has since been incorporated as one of the leading power sources for a broader class of implantable cardiac rhythm management devices, which includes devices that combine ICD, pacemaker and other heart monitoring functions.

She also played an active role in numerous additional improvements of the Li/SVO system that optimised it as a high-rate ICD battery. Her patented inventions facilitated the silver vanadium oxide to become an even smaller battery that enabled the development of more compact ICDs that are safe to use despite their reduced volume. Her patents are also behind batteries powering neurostimulators, pumps and many other implanted devices.

The daughter of Latvian emigrants, Esther Sans Takeuchi credits her parents for instilling in her a strong work ethic from a young age and for awaking her interest in science.

“My father did not believe that school did an adequate job of teaching mathematics and would teach me algebra in the evening,” says Sans Takeuchi. “Both my parents felt that a scientific education was extremely important.”

Sans Takeuchi’s academic programme provided her with a rich background for her later professional work. She earned a bachelor’s degree in chemistry and history from the University of Pennsylvania and a PhD in organic chemistry from Ohio State University. She then served as postdoctoral research associate in electrochemistry, first at the University of North Carolina at Chapel Hill, and then at the State University of New York at Buffalo. Directly thereafter she worked as a scientist Greatbatch, Inc., and became chief scientist and Director of Battery Research & Development.

She returned to her academic roots in 2007 to take a professorship position at the University at Buffalo, part of the State University at New York (SUNY) and became a SUNY Distinguished Professor.  She came to Stony Brook in 2012.