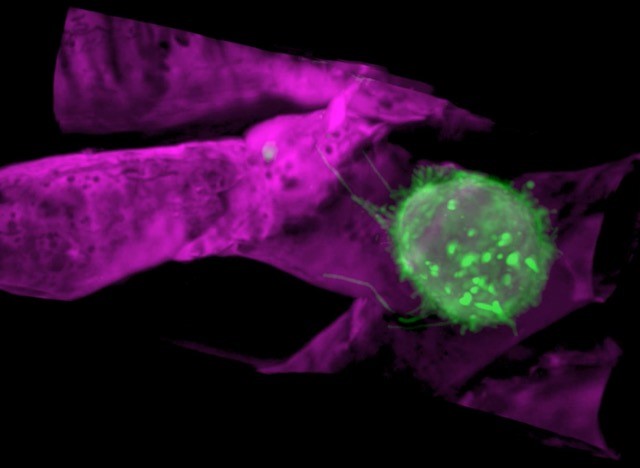 Stony Brook, NY, April 19, 2018 –  An international team of scientists including David Q. Matus, PhD, and Benjamin L. Martin, PhD, in the Department of Biochemistry and Cell Biology and Stony Brook University Cancer Center researchers,  have developed a new cell imaging technology combining lattice light sheet microscopy (LLSM) and adaptive optics (AO) to create high-resolution “movies” of cells in their 3D environment that also captures subcellular processes. Published in Science, the research reveals a technology that shows the phenotypic diversity within cells across different organisms and developmental stages and in conditions such as mitosis, immune processes and in metastases.

The AO-LLSM technique offers scientists investigating cancer and other diseases new insights into how cells operate and adapt to different physiological environments.

In the paper, the paper, titled “Observing the Cell in Its Native State: Imaging Subcellular Dynamics in Multicellular Organisms,” Professors Matus and Martin used AO-LLSM to capture and visualize the behavior of human breast cancer cells injected into zebrafish vasculature.

They successfully captured time lapse movies at high resolution of breast cancer cells mimicking the cell behaviors characteristic of immune cells (leukocytes). These behaviors include rolling, crawling and invading out of the vasculature. To view the cell moving images created by the AO-LLSM technique, see this video.

“By observing and characterizing these behaviors, such as cancer cells adopting leukocyte-like behaviors, we may be able to discover new avenues to target the spread or dissemination of metastatic cancer cells,” summarizes Matus.

Also involved in the Stony Brook research and co-authors on the paper are Taylor Medwig and Abraham Kohrman, both PhD students in Genetics at Stony Brook.