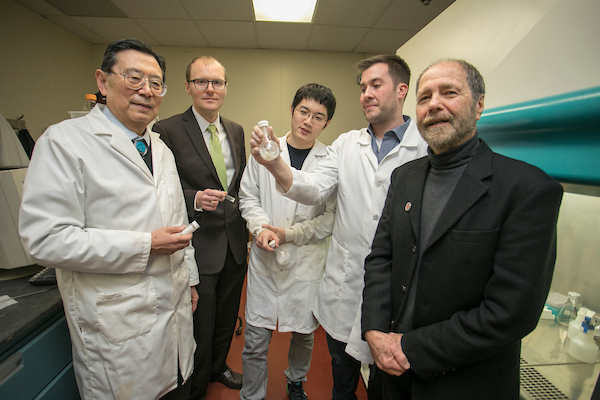 Stony Brook, NY, April 18, 2018 – A new technology developed by Stony Brook University researchers affiliated with the Institute of Chemical Biology and Drug Discovery (ICB & DD) that has identified Fatty Acid Binding Proteins (FABPs) as drug targets of the body’s endocannabinoid system is licensed to Artelo Biosciences, Inc. Endocannabinoids are natural marijuana-like substances in the body and have potential as the basis for new medicines. Artelo has an exclusive license with the Research Foundation for the State University of New York to the intellectual property portfolio of FABP inhibitors for the modulation of the endocannabinoid system for the treatment of pain, inflammation and cancer.

Their research startedin 2009 with the identification of the FABPs as the transporters of the endocannabinoids. When these compounds bind to the FABP they resulted in higher levels of AEA specifically. By using computational biology for virtual screening and actual assays, the researchers discovered lead compounds that bind to the FABPs and were analgesics for various types of pain.