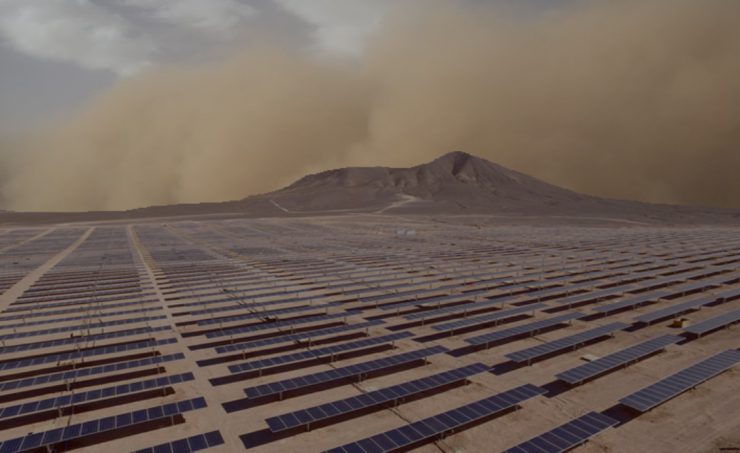 Stony Brook, NY, March 27, 2018 –  A technology in development that uses electric fields to sweep dust from solar panels has promise as a new self-cleaning solar panel system designed to enhance energy efficiency and reduce costs. The technology was created in the laboratory of Stony Brook University Professor Alex Orlov and is being further developed by a Stony Brook research team named SolarClear.

The research team has received a $150,000 grant from PowerBridgeNY to advance the technology, which uses tiny inexpensive electrodes to produce the electric fields. Dust on solar panels can reduce energy output at solar plants by 10 percent and in desert regions up to 25 percent.

According to Professor Orlov, and his student Shrish Patel, a PhD candidate, the researchers are developing a manufacturing process of this self-cleaning system so it can be scaled up for practical applications. They will create a prototype of the technology and conduct in-fielding testing.

“This technology can potentially boost the output of solar panels and save millions of dollars in cleaning costs once commercialized,” summarized Professor Orlov. “We were inspired by NASA technology developed for Mars rovers and made it more practical for earth applications.”

The PowerBridgeNY grant will be awarded to the researchers in increments throughout 2018. PowerBridgeNY is a university-run proof of concept center whose mission is to turn innovations from academic research labs into viable cleantech businesses for New York State. The research was also supported by the Advanced Energy Research and Technology Center at Stony Brook University.